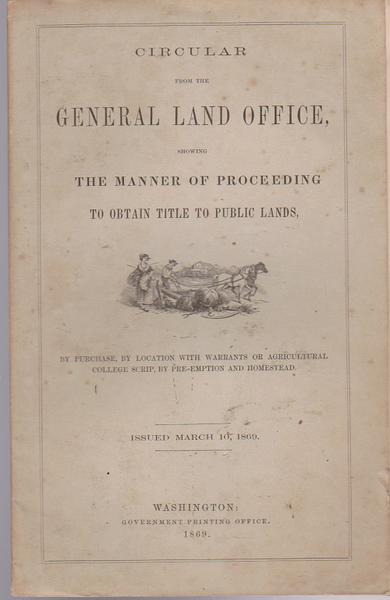 (Homestead Act) CIRCULAR FROM THE GENERAL LAND OFFICE, SHOWING THE MANNER OF PROCEEDING TO OBTAIN TITLE TO PUBLIC LANDS, BY PURCHASE, BY LOCATION WITH WARRANTS OR AGRICULTURAL COLLEGE SCRIP, BY PRE-EMPTION AND HOMESTEAD. GPO. March 10, 1869. 25, [1] pp. Numerous tables. First edition of this third Circular issued by the General Land Office to explain and clarify the 1862 Homestead Act, offering specific guidelines to homesteaders and the local land offices, as well as filling in all the necessary procedural details where the original one-and-a-half page law had been brief, or silent. Through the Civil War, and the first couple years of Reconstruction, the General Land Office had been inundated by complaints from their special agents tasked with unearthing fraudulent and illegal homesteaders, as well as complaints from their local land agents who were legally required to monitor such acts. The General Land Office continually emphasized with potential settlers, and their territorial land offices that the Homestead Act’s original intent was to establish “actual settlers” on the public lands, even allowing their local agents to loosely interpret the rules if that meant giving land to genuine settlers. This 1869 Circular changed the filing fees, some of the procedures about fraud, and prohibited relinquishing homesteads by settlers to predetermined buyers. This Circular also encompasses the Southern Homestead Act of 1866 provisions which was enacted to allow poor tenant farmers, sharecroppers, and former slaves in the South to become land owners in the states of Alabama, Mississippi, Louisiana, Arkansas, and Florida. These annual circulars would continue to be issued yearly until 1904. See: Edwards, Friefeld, Wingo, Homesteading the Plains: Toward a New History (2017), pp. 41-64; Rhea Wick, Appendix I: An Annotated Review of GLO Circulars, pp. 205-216. ! Minor wear, overall in vg cond.