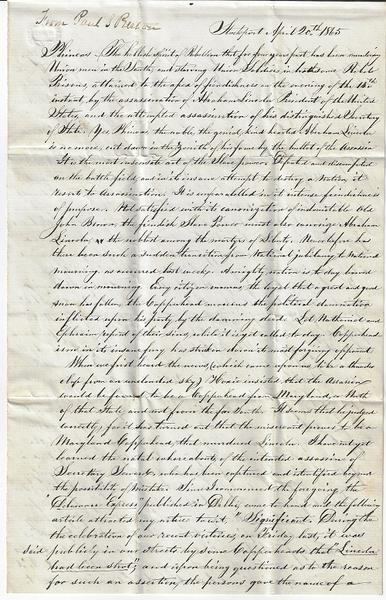 Phineas - The hellish Spirit of Rebellion that for four years past has been mustering Union men in the South, and starving Union Soldiers in loathsome Rebel Prisons, attained to the apex of friendishness on the evening of the 14th instant, by the assassination of Abraham Lincoln President of the United States, and the attempted assassination of his distinguished Secretary of State, Yes, Phineas, the noble, the genial kind hearted Abraham Lincoln is no more, cut down in the zenith of his fame by the bullet of the Assassin. It is the most insensate act of the Slave power. Defeated and discomfited on the battlefield, and in its insane attempt to destroy a nation, it resorts to Assassination. It is unparalleled in its intense friendishness of purpose. Not satisfied with its canonization of indomitable Old John Brown, the findish Slave Power must also canonize Abraham Lincoln, the noblest among the martyrs of Liberty. Never before has there been such a sudden transition from National jubilancy to national mourning as occurred last week. A mighty nation is to day bowed down in morning. Every citizen mourns, the loyal that a great and good man has fallen, the Copperhead morns the political damnation inflicted upon his party by the damming deed. Let Nathaniel and Ephraim repent of their sins, while it is yet called to day. Copperheadism in its insane fury has stricken down its most forgiving opponent.

When we first heard the news, (which came upon us, like a thunder clap from an unclouded sky) Howie insisted that the Assassin would be found to be a Copperhead from Maryland or North of that State, and not from the far South. It seems that he judged correctly for it has turned out that the miscreant proves to be a Maryland Copperhead, that murdered Lincoln. I have not yet learned the natal whereabouts of the intended assassin of Secretary Stewart, who has been captured and identified beyond the possibility of Mistakes. Since I commenced the forgoing, the “Delaware Express” published in Delhi, came to hand and the following article attracted my notice to wit. “Significant. During the the celebration of our recent victories, on Friday last, it was Said publicly in our streets by some Copperheads that “Lincoln had been shot”, and upon being questioned as to the reason for such an assertion, the persons gave the name of a notorious Rebel sympathizer living in Meridith, as authority. This fact affords food for reflection, and suggests Some guesses as to the intent of complicity between Northern Copperheads and Southern Assassins.” What adds to the Significancy of the fact here details, is that it appears from the developments of the past year that there is at least 200,000 Knights of the Golden Circle, in the State of New York, and that Booth the assassin belongs to the Same order, as alleged. You must admit the announcement at Delhi, Delaware County, N.Y. made on the day of Lincolns actual assassination has a very Suggestive Squint. Within the last Eight days I have lived under two national administrations, that of Abraham Lincoln, and that of Andrew Johnson. For this duality of political existence I am indebted to the bullet of an assassin. It is horrible to reflect upon. It seems like a troubled dream. The bullet and the dagger of Assassins has plunged my mind into a labyrinth of thought from which it cannot extricate itself.

The Richmond Whig Says that the Assassination of Abraham Lincoln is the heaviest blow that ever fell upon the South. I believe it, although it is of a piece with the whole action of “the sum of all villains” from the first inception of the Rebellion, to the culmination of fiendishness last Friday night. It hoped to produce anarchy and confusion by the cowardly Slaughter of the nations Administrative heads, in which (thanks to the wise provisions of our national Constitution), it has most Signally failed. Another “child of the people” who has passed through the furnace of Rebellion, steps quietly into the Shoes of the murdered Lincoln and the administrative Machine “pursues the “even tenor of its way”, working as smoothly and cozily as if the Demon of Rebellion had not by “murder most foul,” committed a “fete de se”. I have no faith in the honor, Sincerity or integrity of anyone of the leaders of this causeless and unholy Rebellion. For deluded ignorance I have both charity and mercy, but none for ingrates educated at the expense of the Republic, who purjuriously and tresonably conspire to achieve its destruction. If death is the penalty for the premeditated murder of an individual, what ought to be the penalty for the murderers of a nation? Is it a maxim of criminal law, to be tolerated with safety to Liberty, that magnitude in crime Shall soften or lesson the penalty? Phineas, I ____ not among an intelligent people and I opine that the tragedy of last Friday night, will intensify and intolerance by the people of any Such administration of criminal jurisprudence. The “Suaviter in modo” of Social amity will not be tolerated by an outraged people, as screen for premeditated and purjurious Treason. That quality referred to in the forgoing Latin quotation is, and has been in all ages possessed in an eminent degree by Some of the most consummate scoundrels that ever trod the earth. Justice however is blind and in the legitimate discharge of her functions must only listen to the evidence of the actuality of crime for which high breeding is an aggravation and not an excuse. Every leader of the rebellion and more particularly those educated at the public expense, I look upon as perjured miscreants. Why should they not be as amenable to the inflections of violated law as the common Scoundrel. The zest for life is as equally diffused among the latter, as among the former. The repugnance to “Shuffle off this mortal evil” is just as strong with the unpublished as with the published scoundrel,. Therefor let their punishment for crime be identical and equally inexorable in the one case as in the other. I have no sympathy with this morbid admiration of a Stonewall Jackson and a Gen’l Robert E. Lee. The former was I believe a Presbyterian Deacon and even Henry Ward Beecher in the “Independent” carried the idea that he was sincere in his religions profession. I don’t believe a word of it. I believe he was as avant a hypocrite as ever lived, and that if Hell is not the portion of such Deacons, it is rather a useless institution.

The latter held the highest position in the estimation of the Rebel public, as well as officially, and must have had full knowledge of the barbarities inflicted upon Union prisoners, in loathsome Rebel prisoners pens and prisons. Whoever heard of any remonstrance from him against these every day recurring barbarities? Self respect preludes my admiration of Such a Hero. His action in relation to the slaves _____ by the will of his father in law, reflects no honor on him as a man or a Christian. Copperheads and even loyal Union men may admire Such a Man, but I cannot. The pious Stonewall was in favor of sharing nor quarter, of taking no prisoners. He was probably the most merciful of the two exponents of Southern piety and Christian benevolences. Stonewall was for killing prisoners as fast as they came into his power, whilst Gen’l Lee permitted them to be sent to kingdom come by the lingering powers of starvation. My mind revolts from awarding respect to such exemplars of Christian Civilization.

I have to confess my self to have been a supporter of Gen’l McClellan up to the hour he placed Sentinels to prevent his own thirsty Soldiers from drinking a Rebels Spring, and hungry Union horses from pasturing on a Rebel Clover. I then cut him a drift “sans ceremonies” having no mystic tie to bind me to the fortunes of a Traitor. It was never his intention to impair the military power of the Rebellion if he could possibly avoid it. His most splendid strategic movement is his retreat from the land of his birth in order to escape from the arms of his own Military glory, which was rapidly becoming too pungent in the nostrils of an awakened people to render his fatherland a pleasant abiding place. His attempt to ride two horses running in different directions develops the man. We need to look no further. The Chicago Platform was the product of demented brains, and none but demented brains voted for it. Did you ever know a Negro silly enough to vote for a Candidate crazy enough to attempt riding two horses running different directions? I never did. I should not know how to produce mental equality between a Supporter of McClellan for the Presidency., and the Negro in any other way, then by the gift and power to preserve vitality after Serving the latter as booth did Lincoln i.e. by blowing his brains out. There never occurred such another example of the dementation of the political party as that of the Copperheads, an the 8th of last November with perhaps the single exception of the afrofascination of President Lincoln, and the attempted murder of Secretary Seward. Let me hear from you. What think you of Andy Johnson our New President? For one, I have at present much confidence in him for reasons that Space does not permit me to Specify. Remember me to all inquiring friends of any Such thoughts. Yours Paul S. Preston

Paul S. Preston (1796-1874) was a Quaker born in Stockport, Pennsylvania. He studied law and worked as an attorney. Beginning in 1850 he was judge of the court of common pleas of Wayne County. As owner and publisher of the Wayne County Free Press and Bethany and Honesdale Advertiser he was capable of writing luminous letters such as this one which characterizes the heinous crime of President Lincoln's murder as the Confederacy's final act. (Ref. Manuscripts Division William L. Clements Library University of Michigan. Preston-Woodward Correspondence, 1845-1858) $1495.00