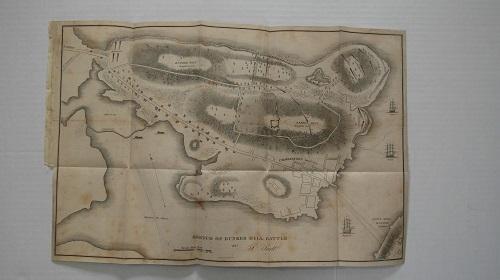 Swett, S. HISTORY OF BUNKER HILL BATTLE WITH A PALN. MUCH ENLARGED WITH NEW INFORMATION DERIVED FROM THE SURVIVING SOLDIERS PRESENT AT THE CELEBRATION ON THE 17TH JUNE LAST, AND NOTES. Second and best edition. Munroe and Francis. 1826. 58 pgs. Also includes NOTES TO HIS SKETCH OF BUNKER-HILL BATTLE. Munroe and Francis, Dec. 1825. 30 pgs. Includs fold out map titled SKETCH OF BUNKER HILL BATTLE BY S. Swett. 19 x 12 ¾ inches. Dbd with front cover detached, stamp stating it was sold by the Providence Public Library, slight chips and tears but overall in vg cond.

“The Battle of Bunker Hill was a battle fought on June 17, 1775, during the Siege of Boston in the early stages of the American Revolutionary War. The battle is named after bunker Hill in Charlestown, Boston, which was peripherally involved in the battle and was the original objective of both the colonial and British troops, though the vast majority of combat took place on the adjacent Breed’s Hill.” (Wikipedia)