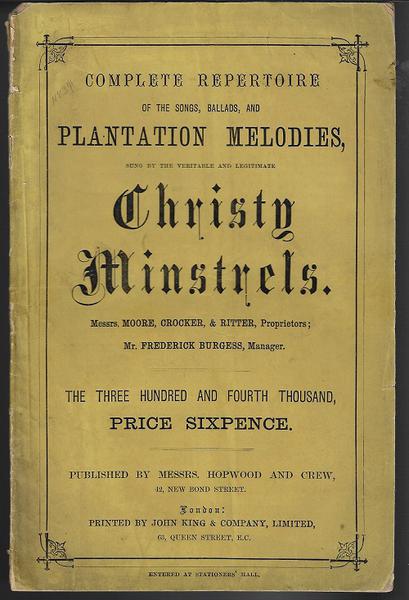 COMPLETE REPERTOIRE OF THE SONGS, BALLADS, AND PLANTATION MELODIES, SUNG BY THE VERITABLE AND LEGITIMATE CHRISTY MINSTRELS.  Messrs. Moore, Crocker & Ritter, Proprietors; Mr. Frederick Burgess, Manager. Published by Messrs. Hopwood and Crew. Printed by John King & Company, Limited. London. C. 1870's. 48 pgs. Pict. wraps with illustration of THE "ARCADE," NEW OXFORD STREET - HENRY GLAVE, NEW OXFORT STREET, W.C. on outside back wrap. Seventy songs, ballads and plantation melodies with the names of the composers and publishers. There are no musical scores. Table of contents on the opening page along with an illustrated ad for Opera Glases Of a Superior Quality At Moderate Prices. The Christy Minstrels were established in 1843 by George and Edwin Christy who retired in 1857. At that point several other groups organized, many times with former members of the original group. This particular Plantation Melodies Christy Minstrels group claimed to be the only group touring the British Isles with several of the original members and thus claimed they had "nearly all the most distinguished members" and were the "Veritable and Legitimate" Christy Minstrels. A wonderful example of African American songs from the mid 19th century. Wear to spine, overall in vg cond.