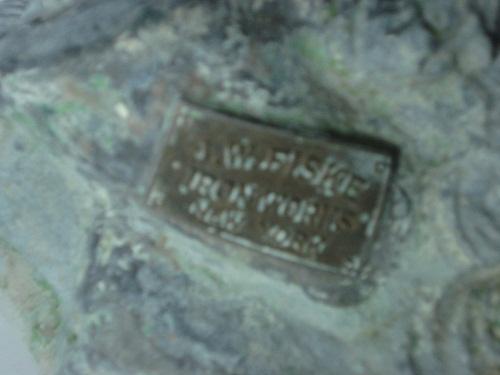 J. W. FISKE AND COMPANY FOUNTAIN - SIGNED Boy Standing on Rock Holding Umbrella. Joseph Winn Fiske, founder of the firm J.W. Fiske, was born on May 22, 1832 (d. 1903) in Chelmsford, Massachusetts before moving to Melbourne, Australia as a merchandiser. In 1857 he returned to this country and along with a partnership with hardware man Thomas W. Brown created the business known as J.W. Fiske and Co. in Boston (by 1862) and New York in 1863. Through the use of very lavishly illustrated catalogs he kept his company in the Victorian eye. His chief rival was Jordan L. Mott's J.L. Mott Iron Works of New York City. However, during the last half of the 19th century and through the casual copying of other Victorian styles of Antonio Canova or Bertel Thorvaldsen, Fiske was able to become the most prominent American manufacturer of decorative cast iron and cast zinc objects. Fiske manufactured statues, urns, garden fountains, cast iron furniture and after the Civil War monuments of dedication throughout the northern United States. This cast zinc fountain - BOY STANDING ON ROCK HOLDING UMBRELLA - is signed J.W. FISKE. IRONWORKS. NEW YORK. 25 ½" tall and 10" diameter at the base. Original condition with outstanding patina. C. 1890-1900.