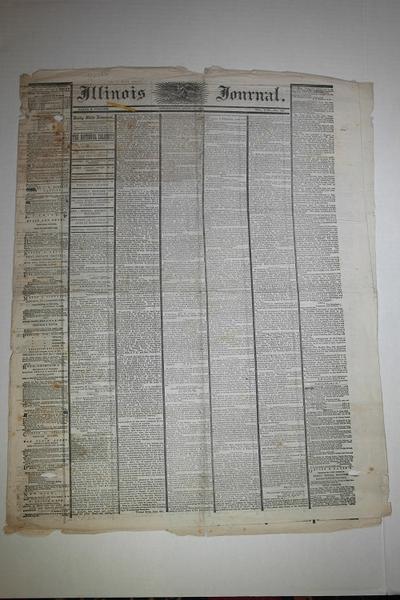 "THE NATIONAL CALAMITY" "The Assassination of President Lincoln" "How Received Throughout The Country" "Attempt to Assassinate Secy. Stanton" "Andrew Johnson Sworn In As President" "Reported Capture of J.W. Booth, The Assassin" "The Whole People In Mourning" The text reads with an April 15 dateline: : "President Lincoln was shot through the head last night at Ford's Theatre & died this morning. The assassin is supposed to be J. Wilkes Booth..." Another report: "Abraham Lincoln died this morning at 22 minutes after seven o'clock." but then another report has: "The President continues insensible and is sinking..." and another: "The 'Star' Extra says: 'At 7:30 o'clock the President breathed his last, closing his eyes as if falling to sleep...There were no indications of pain..." and a Proclamation by the governor of Illinois adds a hometown touch: "Abraham Lincoln has fallen by the hands of an assassin...Illinois mourns the loss of her noblest son & the nation weeps...".

“Abraham Lincoln has fallen by the hands of an assassin. He whom the nation has relied on through the dark hours of the rebellion – the exalted patriot – the wise, the vigilant, the incorruptible statesman, has been stricken down while joy filled every heart that the constitution and laws had been maintained triumphant in the hours of victory. Illinois mourns the loss of her noblest son, and the nation weeps that her Washington is no more....”

Page 2 begins with an editorial headed: "The Great National Calamity" with the text beginning: "Abraham Lincoln is dead! These portentous words, as they sped over the wires throughout the length & breadth of the land...sent a thrill of agony through millions of loyal hearts....". Another column has heads: "Demonstrations of the Respect To President Lincoln" "Mr. Seward's Condition--President Johnson's Speech" "The Assassinations--Six Persons Implicated--Rumored Arrests--$10,000 Reward" "Evidence of An Extensive Plot" "Incidents of the President's Last Day" "His Remains to be Brought To this City" and another column has: "The Death of President Lincoln" "Receipt of the News In Springfield" "A Day of Gloom" and more.

A seldom had opportunity for the serious collector to own the April 17, 1865 Illinois State Journal, the first newspaper issued from Lincoln’s home town printed after his death.