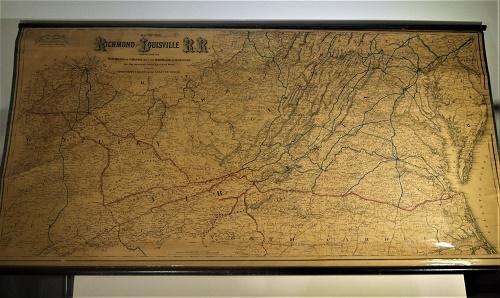 Pull-down map titled MAP OF THE RICHMOND AND LOUISVILLE R.R. Connecting the Railroads of Virginia with the Railroads of Kentucky on the shortest route East and West from the Mississippi Valley to the Atlantic Ocean. Engraved, Printed and Manufactured by C.W. and C.B. Coltrun and Co. No. 182 William St. N.Y. 1882. This large and very detailed map delineates the major railroad routes in Kentucky, West Virginia, and Virginia. The lines of the Richmond and Louisville Railroad are boldly shown in red overprinting stretching from Norfolk to Louisville, while other major lines are colored in blue. Shows eastern United States and includes relief by hachures, drainage, cities and towns and county boundaries. In very fine condition.