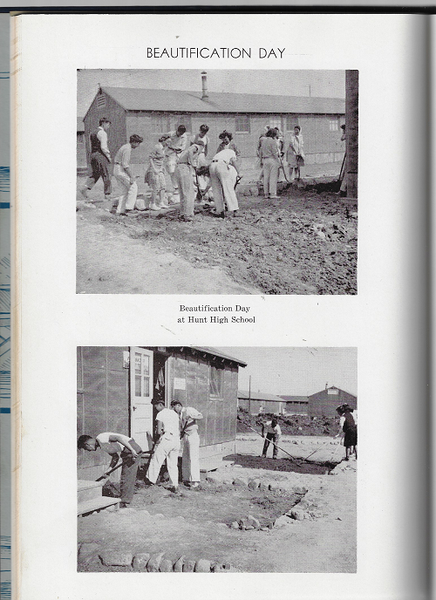 NO WATER! NO SCHOOL! WE STAND ON THE THRESHOLD OF A NEW WORLD!

The following very scarce Japanese Internment Camp Memoirs for the first graduating class of Minidoka Internment Camp has come into stock and I thought it may be of interest to you. At the camp there were 2 elementary schools and a high school. This class year book for the year 1943 shows the people and activities at Hunt High School WITH IN the Minidoka incarceration camp.

Hiroto Zakoji (1926-2010), the owner of the book and one of those interned was from Portland, Oregon and obtained a Master's degree from the University of Oregon and Haverford and worked for many years with the Bureau of Indian Affairs. During the Klamath Termination, Zak served as director of education and Information with the Oregon Department of Education. Later, he served as community development officer for the Portland area office of the Bureau of Indian Affairs, and then was hired by Arizona State University as director of community development training for southwestern tribes. Following his ASU employment, Zak served as director of Volunteers in Service to America training for the University of Wisconsin. He returned to serve as community development officer for the Portland office of the BIA, and in 1977 was loaned to the Confederated Tribes of Siletz Indians to serve as the Tribe's interim general manager. While with the Portland office of the BIA Zak also served in various capacities to assist the BIA and tribal personnel in the Northwest, Midwest, and Southwest reservations. Following his retirement from the BIA, Zak assisted various tribes with developmental projects and, in particular, the Siletz tribe with the Self Governance Designation, tribal gaming, and other projects.

The initial pages of the yearbook contain "Dear Diary" entries which briefly chronicle the terrible conditions and lack of facilities experienced by internees when they arrived in the late summer of 1942.

September "Dust - blinding, penetrating, suffocating dust! There are no schools, no recreational facilities, and ...no hot water. We start from almost nothing. But before the month is over we enroll for school."

October "We see our first movie in this Center in a dingy dining hall. Our younger brothers and sisters march off daily to the elementary school. We join the harvesters to save the crop. High school counseling has begun; still we have no school house."

November it states "School begins! On the 16th of this month we trace unfamiliar steps to the makeshift classrooms. In bare, unfurnished barracks we sit at "seat attached" dining tables, and try to study with the meager supply of books on hand. With November came the cold, the rain, and the first snow. We struggle through the deep, treacherous mud to school."

April "We attend the flag pole dedication ceremony held in the Administration Area. The school beautification plan goes into full swing as the entire student body turn to digging and planting in order to make our "campus" one that we can all be proud of."

June "Block 23 is evacuated to make way for an enlarged school plan. The school library is moved to Barrack Nine..."

July..."Commencement looms before our eyes. Senior day and senior banquet are just around the corner. We are standing on the threshold of a new world - another step, the final one, and our school days in Hunt will be a thing of the past. The once barren grounds between the barracks are now covered with green, criss-crossed with gravel walks. Matching white desks and chairs, a plentiful supply of books, and nicely decorated rooms - we've come a long way since the mess hall table days. We look behind once more with fondness upon the long road that we have pioneered, and we know that the seniors of tomorrow will carry on."

The yearbook follows the usual yearbook format with the first section containing portraits of faculty administrators and students...all of which are predominantly white. However there are 18 "Cadet Teachers". The seniors are all individually pictured while other grades are photographed in groups. The next section is the students who have participated in the "Work Experience Program". "The population of Hunt is slowly decreasing in number consequently resulting in a lack of full time laborers. This creates a problem which only the high school students can solve for a smoother working community" and lists over 50 types of jobs at which interned students spent up to four hours a day. Occupation photos are shown in agriculture, industrial and administrative settings including mimeograph operators, nurses' aids, welders, gas station attendants, construction workers, etc. Clubs, sports teams, and other activities are also pictured.

The year book contains eleven inscriptions scattered throughout with the longest being, "Dear Hiroto, This space is Dedicated to you for the very best in life. Yet, why wish for something that is for there "is" life at the top. and not only that with your wit, smooth, clever humor, poetic and aesthetic sense and your handsome smile with your pleasing Personality and perseverance you will go a long way in life. Just as in "He came Seeing" the "play is the thing", and the necessity of each player to play his part, so, too in life. Life's the thing and we are to play our character under the guidance of our heavenly Director. Yes, our acquaintance has been short but so delightful. But now that we have both gotten dizzy going around together on the same horse on this merry-go-round I think the music is slowing down and I must get off and ride another horse. But I do hope we can ride together again some time.

Two more yearbooks were produced at Hunt High School following this initial effort. Overall this is an important Memoirs of Hunt High School which was located within the Minidoka Japanese Internment camp.