New York Herald - October 29, 1861. Our Naval and Military Operations At A Glance. 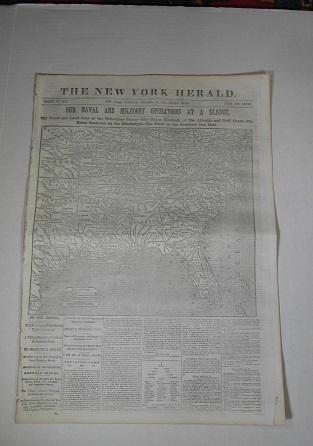 THE NEW YORK HERALD. New York, Tuesday, October 29, 1861 - Triple Sheet. Whole No. 9180. OUR NAVAL AND MILITARY OPERATIONS AT A GLANCE. The Cost and Land Line of the Rebellious States - The Union Blockade of the Atlantic and Gulf Coast - The Rebel Batteries on the Mississippi - The Forts on the Southern Line. Most of the front page is a large map of the Union blockade showing the Union troop lines, Rebel troop lines, rail roads, state capitals and forts. The contents also include The Navel Section, The Military Section, The Rebellion, News From Fortress Monroe, The Atlantic Blockade Squadron, The Battle at Bull's Bluff, The Southern Posts, etc. Minor chip, overall in very good condition.