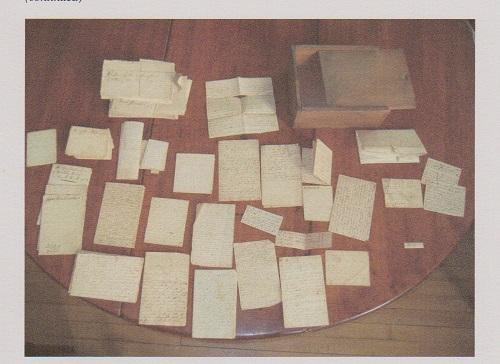 There are ten wrapped sermons and include the following each wrapped individually on previous used paper, some of which content is of interest:

This sermon is wrapped in a paper which declares according to English common law property to a widow and also contains the names of Sarah, Elisha and John Houfe concerning a parsonage.

Within this sermon is the Question of What is the Difference between Justification and Sanctification? And one titled On the Covenant of Works of the Covenant of Grace. Other names on the sermon paper which has been previously used are Gideon Hun, Charles Churchill and Elija Stoddard. Vg cond.

The sermon begins “Quest to Explain Luke 13:24. The Words are Strive to enter in at the Strait Gate for many I Say unto you will Seek to enter in and Shall not be able in which was particularly enquired: 1. What was meant or intended by the Strait Gate. 2. What was meant by the Striving to enter therein 3. What is meant by the Seeking to enter therein of those who Should not be able to do it and where in it differs from the Striving above. 4. Whither this Text is parallel with that in Mat. 7:13 enter ye in at the Strait Gate.

3. Title on paper folder is A Catalogue of the Kings of Judah and Israel on the obverse are numerous mathematical figures.

4. Title on paper folder is On Josephs Being a Type of Christ. On obverse are numerous mathematical figures plus the names of David Demin and Samuel Lattimer.

Sermon starts with the question of “How it appears that Joseph was a Type of Christ. Ans. From the remarkable Likeness that there is in the History of Joseph to the History and Character of Christ. The sermon then proceeds through a series of 9 various sizes of pages. Vg cond.

5. Title on paper folder is On The Beginning and End of the Sabbath. Sermon begins with the Question: When doth the Sabbath begin and end; Answ. I think it appears from Reason and Scripture that the Evening before the Day ought to be kept as holy time and not the evening after ....

On the bottom of this 2 page sermon is written A True Copy ___ me Josiah Willard and also the name James Welles (ae). Within this sermon is a separate stitched book which lists the Divinity discussion topics with the dates proposed and dates answered. These dates are from Nov. 15, 1770 to April 3, 1771. Also on the fourth page are the names of E. Wells, L. Atwood, J. Atwood, D. Stoddard, E. Hun, M. Maggot, J. Wells and A, Seymour. All names have a series of vertical lines next to them which may mean that they were apart of some or all of the discussion topics.

6. Title on paper folder is On Psalm 16.8-11. Obverse of paper folder is an itemization of Thomas Chesters Land and how much acreage was plowed by Joseph Richards, Enoch Helsey (?) and Thos Chester along with mathematical numbers. The one and one half pages are a series of questions and answers. An example would be “What is meant by setting the Lord always before me?” Answer: “Presenting to my mind as my Protector and Patron.” Question “What is meant by he is at my right hand?” Answer “He is nigh to protect, assist and comfort me.” 1 ½ pgs., vg cond.

7. Title on paper folder is Which is First Faith or Repentance. Again, the second page of this sermon has been partially used prior to this writing. Thus we find an account titled An Account of Work done for us in the Summer of the year 1770. The listing is for July 20 through 24. The names listed are Joseph Andrus, Daniel Willard, Elias Francis, James Weller, Ebenezer Sickin (?), Enock Stoddard, Joseph Stoddard, David Stoddard and Levi Atwood.

The 5 page sermon begins “In the first place I would take notice that there are two Respects in which a thing may be said to be first ___ first in order of Nature and first in order of time yet always most commonly among the actions of men that which is first in order of nature to also in order of time and I suppose it is thus respecting faith and repentance tho perhaps the latter sense was chiefly meant in the proposing of a question in the next place. I think it would be proper to give a Short Definition of faith and Repentance to give Some Light. Vg cond.

8. Title on paper folder is On The Change of the Sabbath. The sermon begins with the question of “ Quest: How do we prove the Change of the Sabbath from the Seventh to the first Day of the Week. Ansr: first I think it appears likely that the Sabbath is changed because at first God appointed the 7th Day of the Week in Commemoration of his finishing and resting from his wonderful Work of Creation and he appointed the 7th Day to be kept holy and has commanded therein to give him Praise and Glory that was due to him for his stupendous Works....” 10 various size pages, vg cond.

9. Title on paper folder is Whether Jeptha Sacrificed His Daugher. The sermon is 10 pages and is a series of 13 arguments concerning the title. The folder is heavily torn at the folds, several fold tears within the sermon, overall in vg cond.

10. Title on paper folder is How Can We Prove the Existence of God. On the obverse of the wrap is The Amount of the Invoices of Goods purchased by Josiah Willard and Beraleel Latimer for the Purpose of Retailing Oct. 12, 1785 – April 7, 1786. (This wrap is in very fragile and rough condition but complete.)

Folded within are three sermons.

1. Quest: How do we prove the Existence of God. Answ: From Being in general. From the Frame of the World in general and in particular from the Starry Heavens, from the constellation of Earth and Seas....., from Animals, from Man Body and Soul, from Beasts and Food, from Insects, from vegetables, ..... (6 pgs. vg cond.)

2. Quest: How do we prove the Being of a God. Answ: 1. From Being in General. 2. From the frame of the World in general. 3. From the Starry Heavens. 4. From the Constellation of Earth and Seas. 5. From Animals and vegetables. (7 pgs. vg cond.)

3. Suppose an Atheist should say as follows how should we answer him. This is followed by 4 pages of opposing argument based on scripture. Dated 2nd 1770. (4 pgs. torn at folds – overall in vg cond.)

Also included is a small index type booklet listing several Divinity discussion topics with the locations and dates of the topic being “proposed” and “Answered” Several of the “proposed” and “answered subjects are the wrapped sermons. The dates with in the booklet are from Dec. 11, 1771 to Feb. 1772 with various individual names. An example would be: proposed at Mr. Welless – Dec. 11, 1771 .... Answered at Dec. Willards – Dec. 18, 1771. Proposed topic: What is the difference between Justification and Sanctification. This subject is followed by several scriptural passages which were probably discussed. Another example would be: Proposed at D. Willards Dec. 18, 1771 ...Answered at Eli Stoddards Jan. 1, 1772. The subject was What Differences between the Covenant of Works and the Covenant of Grace? Followed by scriptural references. Sewn with five pages containing 10 “Proposals” and -Answers”.

Also included in the archive are:

1. Spiritualization Books, 1, 2 and 3. 2. Scriptum Anno Dom with Greek inscriptions, dated 1760 – 9 pieces. 3. Scriptum Anno Dom with Greek inscriptions, dated 1761 – 2 pieces. 4. Stitched bound booklet on the Directions for spending the Sabbath Day according to God’s Word. 5. Stitched bound booklet of quotes and facts from the Bible. 6. Other sermons and parts of sermons including: a. Quest. What is Regeneration why it is necessary and wherein it differs from Conversion Repentance and Faith b. Some Metaphors with their Morals, i.e. Sun and Moon – Christ and the Church. c. Whether Restitution for wrongs and Injuries is requisite to true Repentance. Plus pages from other sermons.

7. An interesting letter to a friend commenting on “ye Extravagancies which are now abounding amongst us and in particular ye extravagancies of dress, wherein many run to shameful excess... they spend a great part of their morning in dressing and fixing their fopperies and feathers... and the they go to meeting in a careless airy and wanton manner....” signed at the bottom, Josiah Willard and also inscribed in the margin with the names of his brother and sister, Daniel Willard and Dorothy Willard.

8. An important sermon with no cover features a Revolutionary War commentary that begins: “May we throw down our weapons of Rebellion and submit ourselves to the Prince of Peace, own his rightful authority and under Him as our Captain and in His strength may we take up arms against the World of flesh and ye Devil, the great enemies of our Salvation....”

Condition of archive: In excellent undisturbed condition and retaining the original “Divinity” label and documents.

Provenance: Deacon Josiah Willard was born August 8, 1739, the son of Daniel Willard (B. 1710) of Newington, Connecticut.

The “Divinity” box descended from the Willard Family to the Stoddard Family through Josiah Willard’s sister Dorothy Willard, born Sept. 26, 1741, who married Elisha Stoddard in 1776. The papers include a single letter, dated 1835 and addressed to Marcus E. (Willard) Stoddard (b. 1814), Mayfield Commons, Montgomery County, NY. The letter is addressed “Dear Son”, with the header “Newington June 19, 1835”, and appears to have been written by his father Allen Stoddard (b. 1786), on the death of Marcus’ uncle, Simeon Stoddard (d. June 7, 1835).

The “Divinity” box then passed to Marcus W. Stoddard’s son, Marcus Lewis Staddard (b. 1854), to Gertrude Stoddard (b. 1880) where it entered the Belden Family through her husband Charles W. Belden (b. 1883). It was purchased recently from the children of Mason Stoddard Belden (b. 1916).

The History of Ancient Wethersfield by Henry Stiles, page 795 – Family 7.

Josiah Willard (b. 1739) of Newington, Connecticut

Josiah Willard gathered “A Census of Newington, Connecticut, Taken According to Households in 1776”, as directed by the Continental Congress on December 26, 1775 and The general Assembly of Connecticut in may 1776.”

“That the selectmen in the respective towns in the Colony, are or before the first day of September next, shall take and transmit to his Honor the Governor a particular and exact account of all the persons in, their respective towns in this Colony, as well negroes or slaves for life as white persons, distinguishing the number of those who are under the age of twenty years from those who are above that age, the sexes, or whether married or single, those in the militia, and all able bodied men who do not belong to the militia, also all those who are now in actual service, thereby to enable his Honor to prepare a compleat answer to a letter lately received from the Honble John Hancock, Esqr, President of the Continental Congress 2....”

Josiah Willard is identified as Deacon under the owner of Color`ed Servants’ “461 Guinea Belonged to Deacon Josiah Willard, Annals of Newington, p. 145.”

“Willard, Josiah (Jok) (b. 1739), was born in Wethersfield, Connecticut and was probably the Jok Willard who EA saw in Pittsfield and again in Hatfield in 1775. He studied at Yale, in the same class as Jonathan Ashley Jr., but did not graduate.”