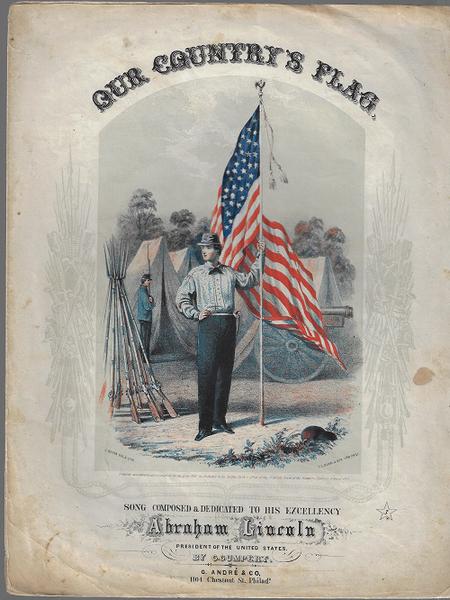 Gumpert, G. OUR COUNTRY'S FLAG. SONG COMPOSED AND DEDICATED TO HIS EXCELLENCY ABRAHAM LINCOLN PRESIDENT OF THE UNITED STATES. G. Andre and Co. Philadelphia. 1861. 5 pgs. "An example typical of the rash of patriotic Unionist prints exalting the American flag, that appeared at the outset of the Civil War.... "Our Country's Flag" is a handsomely drawn illustration appearing on a sheet music cover for a song composed by G. Gumpert, and dedicated to President Lincoln. A Union soldier stands before an encampment, holding the staff of a large American flag. To the left is a tripod of rifles and visible beyond are a sentry, several tents, and a cannon. On either side of the central scene is a trophy of military implements. (Library of Congress) Expected wear, overall in vg cond.