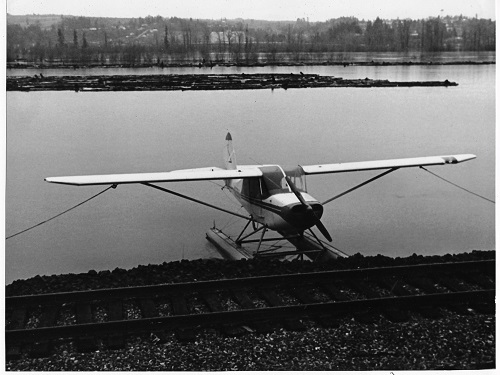 An incredible photo album of forty-two black and white photos (7 ½ x 9 ½ inches) which give an accurate visual depiction of the Salem, Oregon, Christmas Flood, between December 18, 1964 and January 7, 1965. According to the National Weather Service in Portland, Oregon, this flood was “the most severe rainstorm to ever occur over central Oregon, and among the most severe over western Oregon since the late 1870’s”. With flooding conditions beginning on December 18, 1864, by December 23, the Willamette River had crested at thirty feet. In Oregon, 18 people died as a result of the disaster and it caused hundreds of millions of dollars in damage. The flooding on the Willamette covered 152,789 acres. When it was all over the flood was rated as the fifth most destructive weather event in Oregon in the 20th century.

The National Weather Service lists the flood as number five in its list of top weather events in Oregon in the 20th century. “The December 1964 rainstorm was undoubtedly the most severe rainstorm to ever occur over central Oregon, and among the most severe over western Oregon since the late 1870s. Several observing stations across central Oregon recorded two-thirds of their normal annual rainfall in just 5 days....Widespread severe flooding occurred, with at least 30 major highway bridges receiving such damage as to make them unusable. The new multi-million dollar John Day River Bridge was destroyed as were scores of bridges on county and secondary roads. Hundreds of miles of roads and highways were washed out or badly damaged. Thousands of people had to be evacuated due to ensuing floods....Hundreds of homes and other buildings were destroyed and an even greater number were badly damaged....Virtually every river in the state was far above flood stage and mudslides, bridge failures, and inundation closed the state’s roads, airports, and railways. Reservoirs were overwhelmed early on in the storm and many proved unable to release water fast enough to prevent over-topping. Dorena Dam, south of Eugene, had water flowing over the top more than 8 feet deep.”

All photos are in vg cond with great contrast and mounted in a green string tied photo album stamped Photographs.

Return to Art and Photography