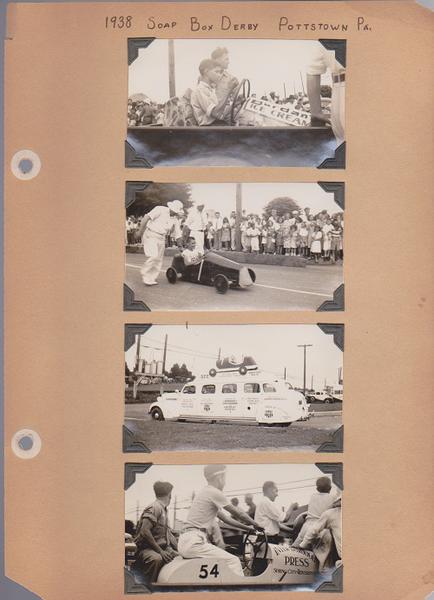 AUTOMOBILE RACING -- MIDGET CARS]. An excellent photo album documenting the Midget Car open wheel racing scene in Reading, PA before World War II. Reading, PA & Pottstown, PA: n.p., 1935-1939. 26 pp (unpaginated), on thick beige-colored paper stock. With 68 original silver gelatin photos printed on glossy photo paper, mounted w/ black corners, sized from 2.25 x 4.25 in. all w/ captions in black ink below, or beside the images, most of the images with identifying text, location, and some dates on versos. Original embossed brown boards, gilt lettering stamped on front cover, two snap rings as binders at gutter margin. This sensational group of original photographs records open wheel midget car racing just prior to World War II in and around Reading, PA, including photos of many of the midget racers and their drivers at the Reading, PA Fairgrounds race track, and the newly opened Sanatoga Speedway. The hunger for speed, the presence of large numbers of skilled mechanics & machinists, a booming midget car racing scene, and the sheer talent drawn to the feeder races for the Indy 500, nurtured incredibly popular midget car racing circuits on the East Coast during the 1930s. This album opens with several photos of the Sanatoga Speedway Midget track dirt surface, open-wheel racers lined up in the Reading pits, grand stands, and a presentation ceremony in the winner’s circle. These races were often promoted by Ralph Hankinson, and J. Earl Way who remained active in Pennsylvania auto racing through the 1950s. The bulk of the following photos document midget racecar drivers, many in front of, or setting with their race cars, and others. The racers featured in the photos include Henri Guerand (1912-1939) who began racing sprints and midget cars in 1933, made his only Indy Car circuit appearance at Syracuse, NY in 1938, and was killed in 1939 at the Nutley Velodrome; Al Cusick who drove for Gustav Schumacher in the 1930s, and qualified for the second Vanderbilt Cup; Walt Ader (1912-1982), who began racing midget cars in Pennsylvania in 1936, and won at the Reading, PA race track in 1946, and later at Atlanta’s Lakewood Park oval in 1947, racing until the 1950s; Jack Moon who raced through the 1930s and after World War II on Pennsylvania Tracks; Chet Gardner (1898-1938), who won the Midwest AAA Sprint Car Championship in 1933 and was named “Southern Dirt Racing King” twice, and competed in the Indy 500 in 1930 and 1938, but was killed during time trials at Flemington Fair Speedway swerving to avoid a child on the track; a photo of Wilbur Shaw (1902-1954) in 1939 the year he won his second Indy 500 race, and was one of the greatest racers during the 1930s, who succeeded in convincing Tony Holman to purchase the Indianapolis Speedway, and many others. The last 8 photos are images of the July 20, 1938 Soap Box Derby held at Pottstown, PA, which was a qualifying run for the National and International Finals to be held in August, 1938 in Akron, OH. See: Don Radbruch, Dirt Track Auto Racing, 1919-1941: A Pictorial History, pp. 270-290; Rae Tyson, A Century of Motorsports: “Gentlemen, Start Your Engines!”, Pennsylvania Heritage Magazine, Vol. XXXIX, No. 1 (2013); Merit O’Neal, Sanatoga Speedway Memories, Overview (2007); Alison Kreitzer, Automobile Racing, The Encyclopedia of Greater Philadelphia (2016). Vg cond.