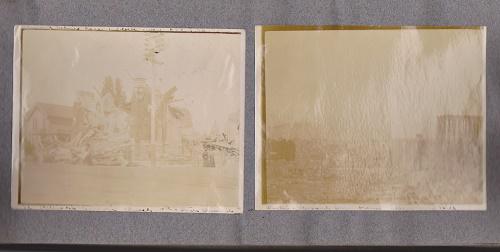 (San Francisco Earthquake Photo Album) San Francisco. Nd. 1906. 48 well-annotated original photographs taken just after the devastating 1906 earthquake and fire in San Francisco, Santa Clara, and San Jose, with the images recording the burned out buildings along Market Street in the distance, the destruction of City Hall, Chinatown, Nob Hill, and some of the refugee camps. 27 leaves of gray thick paper (unnumbered). With 48 sepia-tinted and black & white original photographs, sized from 3.25 x 3.5 up to 5 x 5 in., and nearly all captioned along the borders (over half the photos have strong contrast, while the others have some sunning, and loss of contrast). Original navy blue-coloured ribbed cloth album, gilt lettering on front cover, expected wear, overall in vg cond. Retains circular printed label for the Joseph Emmert Drugstore in Freeport, IL, which closed in 1913. These excellent original photographs faithfully record the widespread damage from the April 18, 1906 earthquake, and subsequent fires which destroyed over 80% of the city of San Francisco, which at the time was the largest city on the West Coast. Nearly three-fourths of the population was left homeless, and makeshift refugee camps in Golden Gate Park, the Presidio, the Panhandle, and the beaches between Ingleside and North Beach operated for years after the disaster as the city rebuilt. Reconstruction began almost immediately, these images show piles of rubble along trolley lines, refugees dragging their possessions in wagons; the destroyed Vendome Hotel in San Jose; several photos of the destroyed buildings in San Jose including the Post Office; fire destruction to apartment blocks on 3rd Street in San Francisco; the ruins of the Pacific Manufacturing Co. in Santa Clara, which produced doors, millwork, etc. with workers walking in front and the advertising facade still standing; the Citizens Bank Building in West Santa Clara; refugee camp on the grounds of the gutted Agnews Asylum for the Insane (suffered Santa Clara Valley’s greatest loss of life with 117 patients and staff killed); piles of masonry and bracing against brick walls in Chinatown; a U.S. Army camp in Santa Clara; viewing the ruins from Telegraph Hill; a destroyed warehouse on San Pedro Street, the collapsed California Pine Box & Lumber Co. Building; refugee Camp No. 3 in Golden Gate Park; St. Patrick’s Church and more.