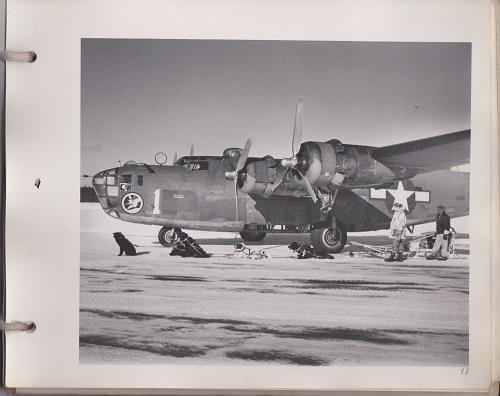 (WWII - Alaska) Alaska Air Dept. SCENIC ALASKA - COURTESY OF ALASKA AIR DEPOT. C. 1945-1946. Photo boards tied with white cord. Twenty one photographs including the front wrap with titles for all images listed on the inside back wrap along with some photographer credits. Some, if not all, the photographers represented by the photos in this album were U.S. Army Air Force aerial photographers during WWII that took pictures of Japanese installations in the North Pacific. By 1942 the Japanese had taken over two of the remote islands in the Aleutian chain, Attu and Kiska. These photographers were sent on dangerous flight missions to photograph enemy troop installations, ordnance areas, and anti-aircraft and communications emplacements.. Their reconnaissance helped the U.S. Army and its allies recapture both islands in 1943. Titles of the photographs include Anchorage, Alaska, Fort Richardson in the background; The Road to Matanuska; Palmer, Alaska, Trading center serving Matanuska Valley; Mt. McKinley; Alaska Hiway between Anchorage and Fairbanks; Where the Aleutian Chain begins; Over the Alaska Range; AAD Land Rescue Team; Seward, Alaska; Mt. Iliamna with its smoking volcano; 54th Troop Carriers over Alaska; Shishaldin volcano; Elmendorf Field; Artic Ice Pack near Nome; sourdough boys; Tip of Iliamna Volcano; Land Rescue Team, Elmendorf Field; Near Umnak Island; Pavlof Volcano; An exposure made by moonlight on Attu; and another Elmendorf Field view. The names of the photographers identified in this album are T/Sgt Paddock; Col. L.G. Mulzer; Vern Brickley; S/Sgt Robert L. Chamberlin; Allan J. deLay; Capt. Rinkert; and E.A. Gyuriak. Several of these men became well known for their photographic work. Vern Brickley (1909-1970) is represented in the collection of the Library of Congress (with the same image as included here of the sled team posed by a military plane) and Robert L. Chamberlin's work appeared in Yank magazine. Allan J. deLay (1915-2005) learned photography working as a 13 year-old in the darkroom of a Topeka, KS portrait studio. He joined the Army in 1941 and was put in charge of building and operating the U.S. Army Air Force photo lab at Cold Bay, AK. He was also a correspondent for Yank magazine and his photos were published in Time and Life. After the war he moved to Oregon and began working for The Oregonian newspaper as a photographer. His images are held by many regional institutions. While in Alaska during the war, the aerial cameramen called their unit SNAFU: Situation Normal - All Film Underexposed. They appear to be examples of the artistic side of these men, capturing views of mountains, volcanoes, dog sleds, snowy landscapes, and rivers. An exception is a photo titled Elmendorf Field by Vern Brickley of a resting dog sled team by the front of a military plane. Another view shows a formation of troop carriers in flight. Minor normal wear in vg cond.