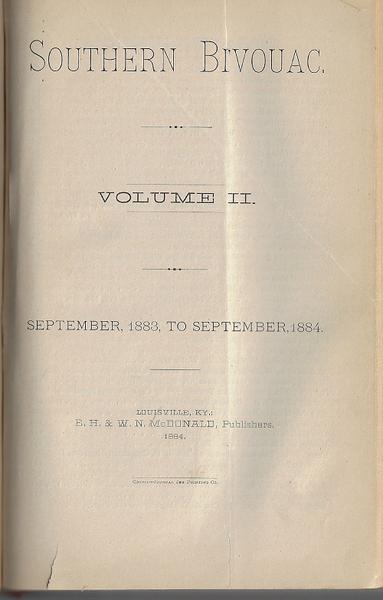 THE SOUTHERN BIVOUAC (Louisville, KY) Vol. 1, No. 2 [October 1882] through Vol. 3 No 9 (May 1885), lacking four issues for a complete run (Vol. 1 numbers 1, 9, 10, and 11, which were never bound in). Bound in 20th century cloth. Binding good, tight, with discoloration to edges. Contents VG, with some pages fragile and with half of one leaf from the February 1885 issue lacking. The Southern Bivouac (just The Bivouac for the first two issues) was the first post-war magazine devoted entirely to recollections of the Civil War from a Confederate point of view. For the first year it was published by the Southern Historical Association; after that by its editor W. N. MacDonald, with partners. These issues contain illustrated biographical sketches of Robert E. Lee, Albert Johnston, Fighting Joe Wheeler, Nathan Bedford Forrest, and others. They also contain narratives of the battles of Kennesaw Mountain, Missionary Ridge, Lookout Mountain, Vicksburg and others. And finally they contain features devoted to Terry Texas rangers, the Confederate cavalry at First Manassas, Hood's Tennessee campaign (five parts), and others. The title was sold in June of 1885 to Farm and Home magazine, which relaunched it in a larger format and with a broader scope. The new series lasted but three volumes as well. Scarce.