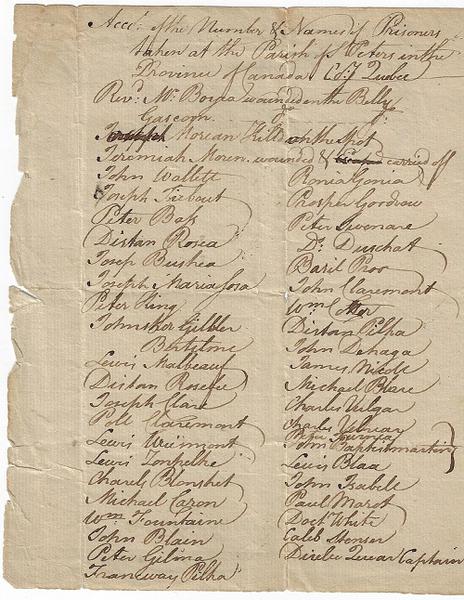 The Battle of Quebec, fought on December 31, 1775, was between the fledgling Continental Army and the British defenders of Quebec City.  The British won, handing the colonists their first defeat of the war.  During the fighting, Continental Army general Richard Montgomery was killed and Benedict Arnold was wounded, and 400 men were captured.

Manuscript. 2pgs. 1776. N.p. “Acct. Of the Number & Names of Prisoners taken at the Parish of St. Peters in the Province of Canada…”. A list of forty-five names, including some priests, of people taken prisoner in a battle in Quebec between Canadians and American troops during the American Revolution. On the back is a message that has been crossed out: “these whose Names are included in the Bracket were Prisoners taken by the Enemy & were not in Arms.  These men were taken by a Party of Continental & Canadian Troops under the Command of Major Lewis Dubois”; Dubois was a soldier from New York.  In late 1775 and early 1776, Continental forces led by Benedict Arnold and Richard Montgomery attempted to capture Quebec, which was then controlled by the British. The Americans lost the Battle of Quebec that took place on December 31, 1775; this January 6, 1776 conflict must have been one of the smaller battles that followed it.  Although the British controlled Quebec at this time, many of the names on the prisoners list are French. The manuscript is in very good condition with wear along one edge.  An unusual document.