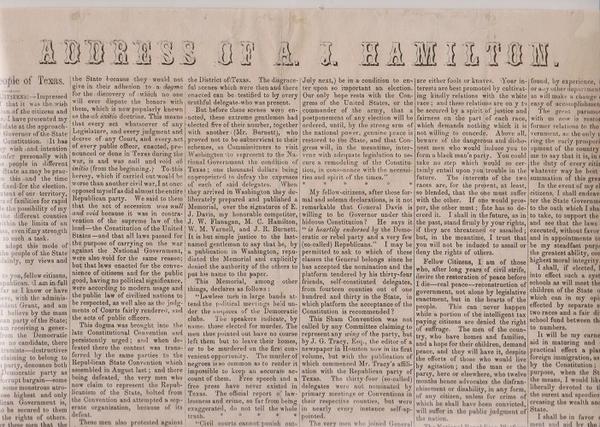 ADDRESS OF A.J. HAMILTON. TO THE PEOPLE OF TEXAS

"Impressed with the belief, that it was the wish of a large portion of the citizens and voters of Texas. I have presented my name as a candidate at the approaching election of the State under the new Constitution." Hamilton makes note that he is a Republican and has "general support from the Democratic party who have no candidate.... There are extremists - destructives rather - who, claiming to belong to the Republican party, denounce both me and the monstrous atrocity - men whose highest and only idea of Republican Government is that office is to be secured to them by restricting the rights of others." He discusses the new constitution and its convention: "Fellow Citizens, I am of those who, after long years of civil strife, desire the restoration of peace before I die - real peace- reconstruction of government, not alone by legislative enactment, but in the hearts of the people." Hamilton did run on the Conservative ticket and was defeated by E.J. Davis who was the president of the Constitutional Convention of 1868-1869. "Davis advocated the disfranchisement of former Confederates, unrestricted Negro suffrage.... In an election held under the direction of the military commander in 1869, Davis was elected.... Davis was the state's dictator for the next four years." Handbook of Texas.