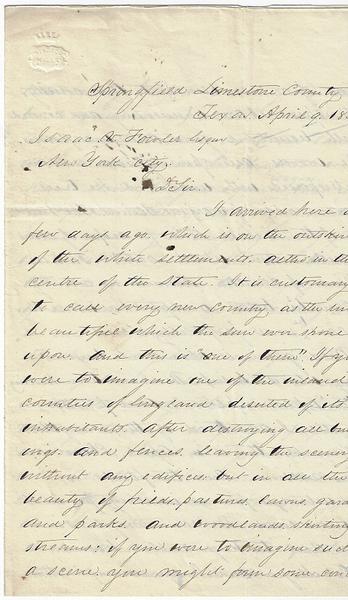 (Letter in total and as written.)

I arrived here a few days ago which is on the outskirts of the white settlements. Altho in the center of the State. It is customary to call every new Country as the most beautiful which the sun ever shone upon. And this is “one of them”. If you were to imagine one of the island counties of England deserted of its inhabitants. After destroying all buildings. And fences leaving the scenery without any edifices but in all the beauty of fields pastures, lawns, gardens and parks. And woodlands skirting streams. If you were to imagine such a scene you might form some conception of a remembrance to this corisity. The prairies are undulating and covered with beautiful grass and wild flowers. The woods are open. Glades seldom interspersed with underwood. The trees large and various kinds. The land is of the richest Soil for crops of corn and cotton, wheat, oats & C. For all kinds of domestic animals. No country can be better adapted or where they can be more profitably reared.

Wild game is abundant beyond my utmost belief. We have been killing the “upland plover”. And partridges until I am tired of the _____. Remember this is in April. Plover are in millions and the flocks of partridges found in every piece of woodland. The same may be said of deer, turkeys, rabbits, hares & so. ______ and I are residing in this little village (Altho’ a county town with brick court house) until we can make arrangements to move out to our lands, distant seven miles. In our tract we have eleven square leagues that is to day 27 square miles. We will soon have the same quantity in an adjoining county for which we have the offer. And besides this we will have the management of as much more in this county and in one adjacent.

We have not yet seen our agent or man of business who is about at Court in another county. When he returns we will go to work in putting papers in order. I am in a good humor with all that I have seen. And am certain that I can realise handsomely from this speculation. I shall write soon again and inter some into particulars. Land has increased in value and in constant demand. I am certain that in two or three years we could sell out all our interest and realise that money if we wished.

I ___ in favour of the Holbrook on you for 100$ in N Orleans which is the last I will ask from you. And in deed I had expected to meet in that city a gentleman from whom I could obtain funds. In that I was however disappointed.

I wish you would write me a letter occasionally. And do not forget the Washington business. As you will now I trust feel that you have a large interest in the Amount obtained.

Within one year we will have a rail road to this place from Galveston.

Like many towns Springfield, Limestone County, Texas has a fascinating history. It became a town site through the donation of Moses Herrin who donated on January 6, 1838 4 lots to any person agreeing to settle in the town. Later that year twelve of those families were forced out by Indian hostilities. Limestone County was established in 1847 with 120 residents. By 1850, the town of Springfield had 5 general stores, 2 hotels, 2 schools, a masonic hall and newspaper. The train alluded to in Albert C. Ramsey's letter would have been the Houston and Texas Central Railroad which planned to come through Springfield if it could get a right- a - way from the residents with the amount of money the railroad offered them. The citizens objected to the railroads offer and the railroad bypassed Springfield by building some miles to the east of town. Without the railroad the town dwindled and died. In 1873 Springfield lost its county seat status, the post office left in 1878 and in the 1930's the town became part of Fort Parker State Park.