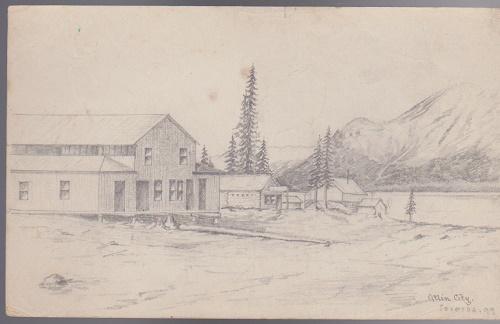 Sundelius, Severus. Collection of 13 original pencil sketches of towns and scenes in Alaska and the Yukon by Severus Sundelius, 1898-1900. The artwork consists of eight sketches on paper measuring 5 x 8 1/4 inches and five sketches on 3 7/8 x 5 inches paper. Both sizes appear to have been part of an artist's sketch book. The larger sketches are titled; all are signed and dated. The eight larger drawings include: "Main Street - Fort Get There, St. Michaels / Severus 98"; "Atlin City / Severus 99"; "Sawmill Atlin City / Severus 99"; "Golden Gate from Hale City, B.C. / Severus Ap 1899"; "Nulato Hills on Yukon R. / Severus 1900"; "South Atlin Lake / Atlin City, B.C. / Severus 98"; and two different views, both titled "Bet. Koserefski and Russian Mis. / on Yukon / Severus 1900". The five smaller scenes, most likely views of the lake, rivers and mountains around Atlin City, are signed and dated with no titles. The view of Fort Get There on St. Michael Island shows the main building of the North American Transportation & Trading Company's station which was established in 1892. Fort Get There was en-route to the Yukon and many would-be miners who traveled north on steamers from Seattle stopped there to transfer to other means of transportation as they made their way to the mouth of the Yukon River nearby. The N.A.T. & T. Co. played a major role in outfitting gold miners on the way to the Klondike. The two Atlin City sketches depict scenes of the town located on the east shore of Lake Atlin. Gold was discovered in that area in 1898 and it quickly drew people away from Skagway, Dawson, and other mining communities. The route from Skagway to Atlin City was made easier with the completion of the White Pass & Yukon Railroad up over White Pass to Lake Bennett. From there, miners had to make several steamboat transfers and take narrow gauge portage until they reached Atlin Lake where they had to catch another steamboat to Atlin City. Another view shows a dog sled team going through the Golden Gate channel on Taku Inlet on a route between Atlin City and Log Cabin. Severus Sundeius (1862-1949) was born in Sweden. It is surmised that he was in Alaska, British Columbia, and the Yukon mining districts between the years 1897- 1903, since the Bancroft Library has a collection of 83 of his drawings that date from those years. But, to confuse the dating of his time up north, we have seen a sketch of a brewery in Portland, Oregon signed by him and dated 1900. In a 1905 legal case in Nome, AK, regarding controversy over mining claims, it mentions that Severus Sidelius [sic] had a claim called "No. 1 Below Discovery on Ophir Creek" that was alleged to have been made on May 10, 1898. The suit mentions that part of this claim was abandoned in August, 1901. Sundelius moved to the San Francisco Bay Area sometime during the first decade of the 20th century where he became an employee of the Cypress Lawn Cemetery in San Francisco. While in that position he applied for and received two patents: one in 1909 for a spray burner which was patented in 1912, and the other for a cremation furnace that was filed in 1916 and patented in 1922. Little else is known about Sundelius at this time except that his wife, Gertrude, was born circa 1875, and that he entered a pencil drawing in a San Francisco Art Association exhibit in 1935. Whether he was trained in art or not, his pencil sketches are wonderfully executed and could stand alone as artwork. The specific scenes of the Alaska - Yukon gold rush period make them even more significant. All are in near fine to fine condition.