Broadside for The Dayton Hedge Co. 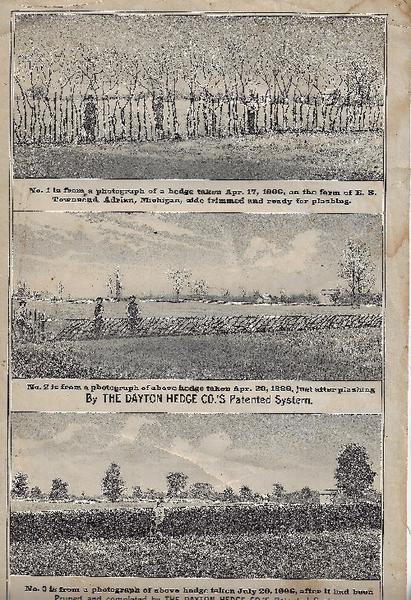 Young, Wesley (Pres.) Wilson, A.L. )Vice Pres.) and Hetzel, Charles M. (Sec.) Photo no. 1 is from a photograph of a hedge taken Apr. 17, 1886, on the farm of E.S. Townsend, Adrian, Michigan, side trimmed and ready for plashing. . . hedge taken Apr. 20, 1886, just after plashing. . . pruned and completed. . . . Dayton & Cincinnati, OH The Dayton Hedge Co.; The Henderson-Achert Lithographic Co., 1886. One linen-backed lithograph broadside, folio, 12 x 18 in., w/ 3 separate images sized 4.25 x 10.5 in. taken from photographs, w/ text below each image (some creasing, slight fraying upper fore-edge, edgewear, pin-holes at corners, very minor tidemark to upper right corner), still VG- copy. First edition, thus, of this promotional advertising broadside issued by The Dayton Hedge Co. featuring the use of Wesley Young’s (1837-1916) patented lattice hedge fence and plashing technology. In 1882, he had invented a machine for wiring branches, lattice, or tags to articles, which was basically an early nail-gun stapler. Traditional plashing of fences to form a wattle like secure hedge fence was not only time-consuming, but also subject to weather damage which took years to re-grow and repair in areas with extreme cold such as Michigan, Ohio, and areas across the Midwest and East. Young’s patented system involved tensioned wiring run like a lattice through the prospective hedge plants, and then his “device” would hold the wire steady and then guide the double-pointed nails (staples) into the branch over the wire. The hedges then were more secure against cattle & other livestock, and predators. The image here shows the initial planting of the hedge saplings on April 17, 1886, plashing the roots and trimming the tops while running the wire in the second image taken April 20, 1886, and finally the fully grown in secure hedge on July 28, 1886. Young’s company actively manufactured farm implements, including hedge pruners, until about 1894 when he shifted the company by merging with Judson & Co. of Rochester, NY to manufacture nurserymen’s and florists’ labels, selling them modified versions of his machine to tack the labels to crates, and product. He posted in the 1896 Report on Reciprocity & Commercial treaties that The Dayton Hedge Co. had ceased manufacturing farm implements and hedge equipment. Henderson-Achert Litho Co. was established in the 1880’s in Cincinnati, OH, specializing in advertising signs, and specifically breweries, and for a time took on a partner in the 1890’s, changing the firm’s name to Henders-Achert-Krebs. They purchased in 1925 by the Strobridge Lithographic Co. in Norwood, Ohio. Worldcat locates 1 similar piece sized 9 x 11 in. at U of Delaware for Hedge Fence on Sugar Grove Farm; See: Western Manufacturer, Vol. XIV (1887), pp. 96, 138; Success with Flowers, Vols. III-IV (1894), pp. 204,229, 252, iv.