(Canada) To Emigrants and Natives In Search of Lands for Settlement 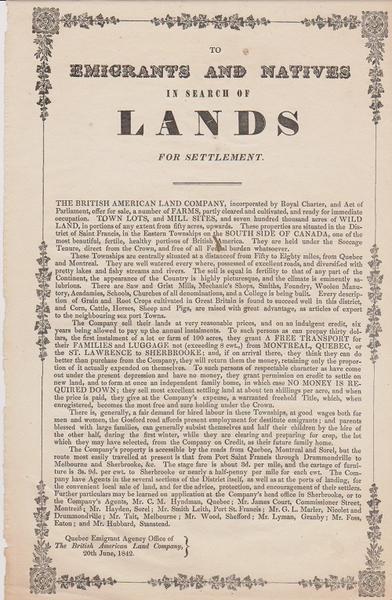 TO EMIGRANTS AND NATIVES IN SEARCH OF LANDS FOR SETTLEMENT. The British American Land Company. Quebec. 1842. 7 3/4" x 12". Printed with printer's decorative frame borders and in very fine condition. The publication of this broadside was meant to entice prospective settlers in Lower Canada to purchase lands owned by the British American Land Company. The company was chartered in 1834 and bought 700,000 acres from the British Crown, hoping to sell the land in lower Canada, which would also have the benefit of boosting the English speaking population in the region. The lands offered in this broadside announcement were located in the District of Saint Francis, within 80 miles of Quebec and Montreal, "One of the most beautiful, fertile, healthy portions of British America. They are well watered every where, possessed of excellent roads, and diversified with pretty lakes and healthy streams and rivers. The soil is equal in fertility to that of any part of the Continent, the appearance of the Country is highly picturesque and the climate is eminently salubrious." Most of the company's lands were sold by the early twentieth century. Amicus 1 copy.