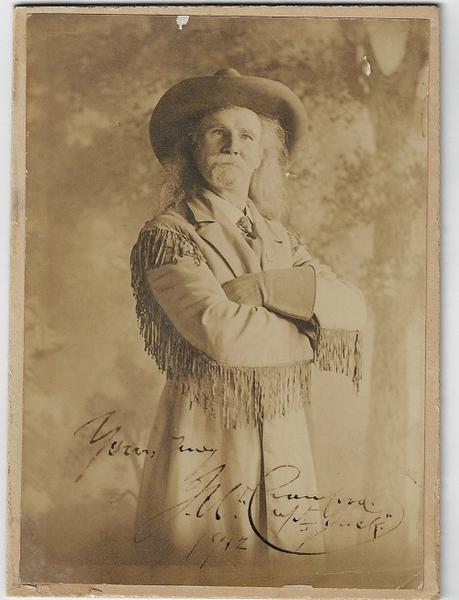 CAPTAIN JACK CRAWFORD photo. Unidentified photographer publicity photo. Autographed on photo "Yours Truly. J.W. Crawford - Capt Jack. 1912. "John Wallace ("Captain Jack)" Crawford (1847–1917), known as "The Poet Scout", was an American adventurer, educator, and author. "Captain Jack" was a master storyteller about the Wild West and is known in American history as one of the most popular performers in the late nineteenth century. His daring ride of 350 miles in six days to carry dispatches to Fort Laramie for the New York Herald, to tell the news of the great victory by Gen. George Crook against the village of Chief American Horse at the Battle of Slim Buttes during the Great Sioux War of 1876-1877 made him a national celebrity." (Wikipedia Several minor background chips, overall in vg cond.

Return to Art and Photography