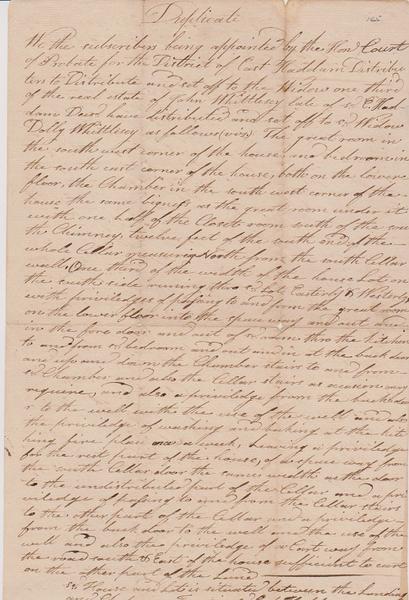 A fascinating probate will of John Whittlesey for his widow Dolly Whittlesey of East Haddam, Connecticut. Adopted from English common law the widow and minor children had the right of dower granted upon the passing of her husband. This particular right of dower indicates that John Whittlesey died intestate. This contract lays aside one third of his estate for the support of his widow which she will be able to use until her death. Upon her death the property would revert to her deceased husband’s children.

For the precise reason of preventing quarrels Dolly Whittlesey’s third was set forth in probate in a very specific manner as stated in this probate document.

S’d House and Lot is situated between the Landing and Chapman’s Ferry in s’d East Haddam.

East Haddam, Middlesex County was incorporated as a separate town from Haddam in 1734. The reference to Chapman’s Ferry is that of Capt. John Chapman who began ferry service across the Connecticut River in 1695. Ferry service ended in 1913 with the completion of the swing bridge.