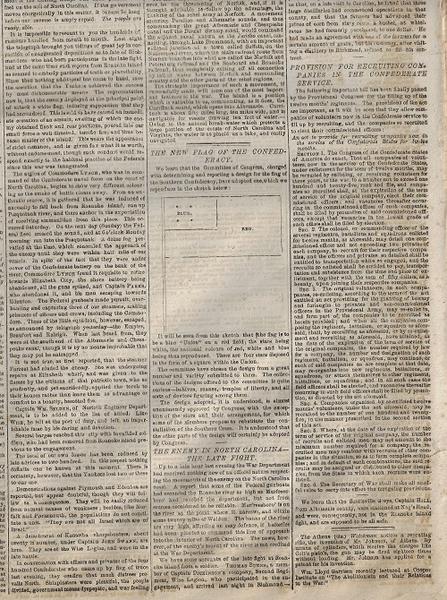 DAILY RICHMOND EXAMINER, Virginia, Feb. 13, 1862. From the capital of the Confederacy the newspaper has a most interesting illustration and article titled "THE NEW FLAG OF THE CONFEDERACY" which includes an illustration of it (unusual to find such in a Confederate newspaper) with related  text including "We learn that the committee...charged with determining and reporting a design for the flag of the Southern Confederacy, have adopted one which we reproduce in the sketch below...the flag is to be a blue "Union" on a red field, the stars being in white, the national colours of red, white and blue being thus reproduced. There are four stars disposed in the form of a square within the Union. The committee have chosen the design from a great number and variety submitted to them The collections of the designs offered to the committee is quite curious - behives, snakes, temples of liberty, and all sorts of devices figuring among them. The design adopted, it is understood, is almost unanimously approved by Congress, with the exception of the stars and their arrangement, for which some of the members propose to substitute the constellation of the Southern Cross. It is understood that the other parts of the design will certainly be adopted by Congress." Half of the front page is taken up with ads and half with Civil War news with headlines of "Gayeties Of The White House", Mrs. Lincoln's Free Summers", American Affairs in Europe - Recognition of the Southern Confederacy, etc. Page 2 which is the page of the flag illustration also has articles titled "The Enemy In North Carolina", "The Roanoke Disaster - Additional Particulars of the Battle Our Forces at Roanoke Island", etc. Page 3 has combination of ads and "Telegraphic News" concerning Civil War content. Complete as a four page newspaper, never bound or trimmed, and save for a upper corner of the back leaf with a printing error (paper corner was folded when printed), and some dirtiness down the vertical fold of the front page, this issues is uncommonly nice and in vg cond.