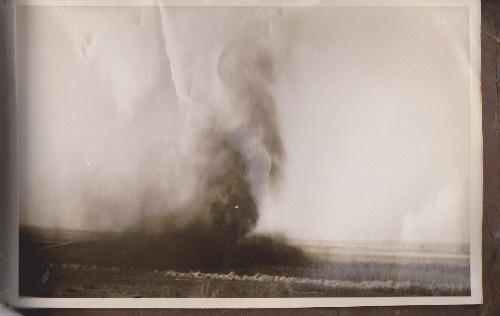 Photograph Album Documenting The EASTON #1 DISCOVERY WELL. GARLAND, WYOMING. 1930. photos are 4 7/8 x 7 3/8 inches, string bound in a plain brown paper cover. Each photo is affixed with white cloth tape to hole-punched card stock tabs. The covers of the album are worn and creased with the first photo being spotted and discolored in the upper corner which shows only blank sky and does not affect the body of the image. There are light soil and ink notation to the verso of the last photo. Although the images are somewhat grainy and blurry the details and the general scenes are quite discernible. Overall in nice condition.

The album through a series of 10 black and white photos shows the documentation of the Easton #1 well's eruption. The photos begin with an image of five men in business suits standing together in an oil field, overlooking and perhaps inspecting an array of pipes leading to the well. This is followed by six images of the well and surrounding area, occasionally including fairly indistinct figures of other people, and the culminating three photographs show progressively bigger oil spouts pluming up from the well. On the verso of the last photo is written "Easton #1. Garland, Wyo. 1930 - Discovery Well.

"Garland – a faulted asymmetric anticline probably caused by fault-propagation folding. It was initially called Byron Field. With the development of a new field a few miles northeast called Byron, the original was renamed Garland. The Cody Shale is exposed over much of the structure. It was discovered in 1906, producing light oil from the Frontier Formation. In 1915 sweet gas was found in the Cloverly Formation. In 1927 “sour gas” (hydrogen sulfide bearing) was discovered in the Phosphoria Formation, and deeper drilling recorded “sour gas” from the Tensleep Sandstone. Oil and gas was discovered in the Madison Limestone in 1930. Since 1940, additional discoveries were made in the Morrison, Sundance, Chugwater, Amsden, and Darby. The oil produced from Wyoming State Office Reservoir Management Group - 22 - 1907 to 1908 was used in development work; that produced from 1909 to 1912 was refined in a small plant at Cowley. Early gas production was piped to Lovell and Powell for domestic and industrial uses. From 1917 to 1921 most gas was used at a plant built in Cowley to make carbon black. In 1994, Garland was the fifth largest oil field in the Bighorn Basin, with 160 million barrels of oil in place (Demiralin et al., 1994). Greybull – an anticline with gas trapped structurally and oil confined to the north." (United States Department of the Interior Bureau of Land management - Wyoming State Office - Reservoir Management Group)