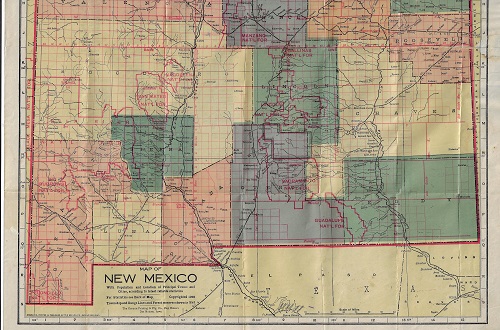 Considered to be extremely rare, this pocket map shows the entire New Mexico Territory, four years before statehood surrounded by aspects of the states of Texas, Oklahoma, Colorado and the Territory of Arizona. The map gives a very good visual of the railroads and rivers that crossed through New Mexico Territory. Plus, the National Forests are outlined in red, and include Guadalupe, Gila, San Mateo, Mt. Taylor, Pecos and Taoes, etc. Another high-lite of the map is that Native American reservations are indicated by black dashed borders and include those of Zuni, Mescalero Apache, Jicarilla, sections of the Navajo and Southern Ute reservations.

Several minor repairs, and a minor eastern border stain, overall in vg cond. Quite rare with only one other copy being located in the Museum of New Mexico Library.