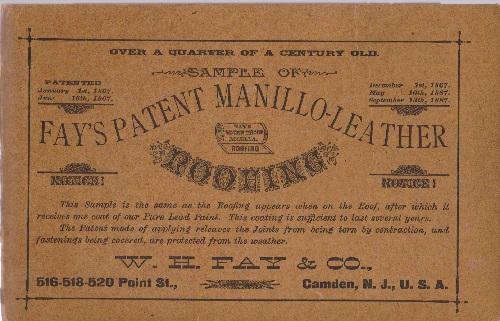 W.H. Fay and Co. OVER A QUARTER OF A CENTURY OLD. SAMPLE OF FAY'S PATENT MANILLO-LEATHER. THIS SAMPLE is the same as the Roofing appears when on the Roof, after which it receives one coat of our Pure Lead paint. This coating is sufficient to last several years. The Patent mode of applying releaves the Joints from being torn by contraction, and fastenings being covered, are protected from the weather. C. 1890. Pict. wraps, 44 pgs,illustrations, contents include information and illustrations of various buildings which the roofing was used on, testimonials with one inquiry laid in, special notice, directions for applying. THE HOUSE ROOFED WITH PAPER "It is a mark of the progress of the age and the thoughfulness of the syndicate of contributors that the house is roofed with paper. No shingles to blow off; no sheets of tin to rattle like theatrical thunder, or roll up in a high wind and blow away, but the new patent paper roofing lying close and snug to the rafters underneath, and impervious alike to rain and sun; the latter, by the way, no insignificat property, for the gables are lightened by dormer windows, and but for FAY'S PATENT MANILLA ROOFING, and the loft below it, the attic rooms of the slate colored house would not be as cool and pleasant as they are." this quote was relating to the President's cottage at Cape May Point in New Jersey of which their is an illustration. Quite scarce and in vg cond.