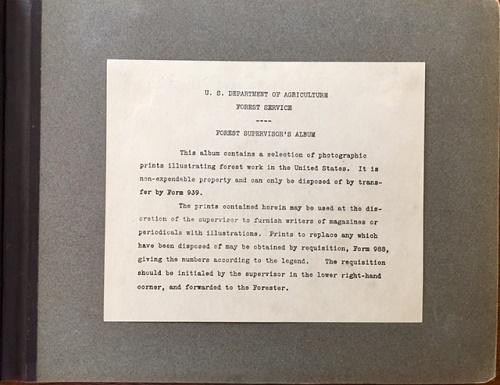 This outstanding forestry photo album documents US Forest Service workers in National Forests across the West illustrating the logging practices, timber sales, controlled burns, replanting efforts, trail building, and more during the first decade of the 20th century. Many of these Western Forest Service field party activities were led by Seattle forestry engineer, Stanton G. Smith (b. 1882) from 1904 following his graduation from Yale up through the 1930s. These crisp and vivid images were intended to be used as public relations photographs at the discretion of the Forest Supervisor, who could order prints from the negative numbers by showing the albums to writers, magazines, books, or even newspapers necessarily reflecting the current practices of the Forest Service. The images include skidding logs by horse team in the Coconino National Forest, AZ, a log slide through second growth timber in the Kaniksu National Forest, ID; piles of cut logs for driving on the creek in the Cheyenne National Forest, WY; a salvage log left on the military reservation at Fort Wingate, AZ by careless contractors; a controlled burn in Arapaho National Forest, CO; as well as a striking photo of Montezuma Castle built by the Sinagua People of Arizona between the Coconino and Prescott National Forests. Also included are photos of Forest Service nurseries, firefighters grubbing out roots on the fire break in the Angeles National Forest in Santa Ana Canyon, a wood distillation plant in Collins, GA, timber testing, brush control methods using sheep and Angora goats, a Forest Service hunger with Grizzly Bear skin draped over his shoulder, skins of coyotes staked out, and home of an enterprising rancher in the Pend d’Oreille National Forest, ID. These sample albums would often be updated, or changed out as Forestry practices were updated, modernized, or equipment replaced horse teams for logging, and other logging methods evolved. Although the photographs in this album are focused primarily on Western States such as Wyoming, Idaho, Oregon, California, Arizona, Colorado, and others, there are images of other states where the Forest Service maintained services and operations in Georgia, Maine, New York, and others. The Crater National forest was established by the US Forest Service in July, 1908 from portions of the Cascade, Klamath, and Siskiyou National Forests, and by the 1930s the name was changed to the Rogue River National Forest. Minor expected wear, overall in vg cond with great photo contrast. Bookplate for Crater National Forest Service on front pastedown. No copies located in Worldcat; See: Forest Service Field Party Activities by Stanton G. Smith, National Archives of the United States, Records of the Forest Service, 95.14.