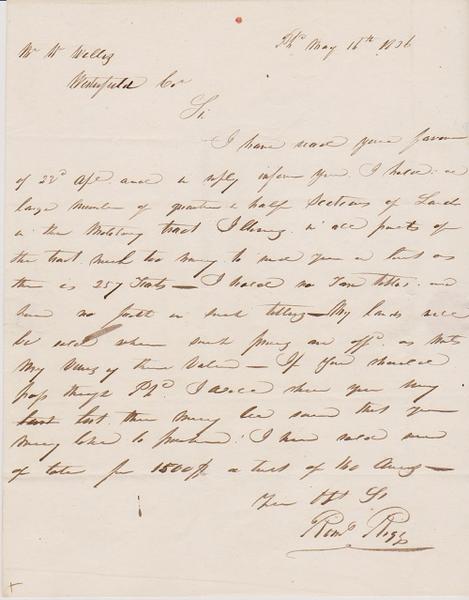 "Sir. I hold a large number of quarter and half Sections of Land in the Military tract Illinois....much too many to send you a list as there is 257 Tracts....My lands will be sold when such prices are offd. as meets my views of their value... There may be some that you may like to purchase. I had sold some of lots for $1500, a tract of 160 acres.

Romulus Riggs (1782-1846) was a prominent Philadelphia merchant and partner with George Washington's grand-nephew in one of the first banking establishments in the District of Columbia, forerunner of the famed Riggs National Bank, founded by his own nephew, and was destined to become the largest banking establishment in the nation's capital. The bank would later help bankroll Morse's Telegraph, the Mexican-American War and the U.S. purchase of Alaska.

Long before that, the senior Riggs had bought up 40,000 acres in the western Illinois "Military Tract", Mississippi River lands set aside, on the border of present day Iowa and Missouri, as bounty payments to volunteer soldiers in the War of 1812. So taken was Riggs with the prospects of the frontier state that he named his daughter "Illinois". He could not have imagined that, after his death, the future Riggs Bank would one day number Abraham Lincoln of Illinois among it depositors.

A fascinating letter in very fine condition. For the most part very legible.