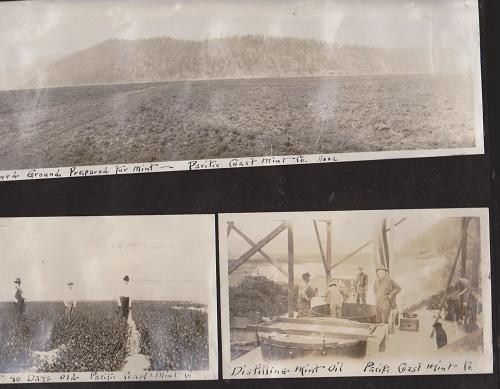 This exceptional land promotion marketing photo album details the formation of the Pacific Coast Mint Company which began planting, harvesting, distilling, and producing mint oil in 1920 on acreage of diked marshland in the Upper Kalamath Lake. The Eagle Ridge Property in southern Oregon, had been purchased in 1919 by Dr. Gaddes from Dan & John Griffith, which also included a tavern, boat landing, resort area, and an additional 600 acres of timber. The present Company prospectus album claims 1300 acres were under cultivation, but it was actually about 220 acres, leased to the Pacific Coast Mint Company, initially formed by Epperson, Siemans, Watkins, and Mattern with an initial investment of over $ 25,000, which included the farm buildings, equipment, farm tractors (including a Caterpillar tractor), combine, harvester, and leasing an office in the Swanson Building in downtown Klamath Falls. The explanatory text under and opposite the photos promote the mint farming operation, describing how the initial tract planted in April 15th, 1920 -- harvested after Sept. 1st -- yielded 40 lbs. of mint oil per acre in the first year, next to the wheat, rye, barley, oats, and alfalfa demonstration crops produced, resulting in over $ 200.00 net profit per acre. The photographs show the plowing and preparation of the land, the planting of the mint, the loading and unloading of mint from the The Caledonia -- the company steam launch, the glass bottles in which the final product was bottled and sold, the sales office showing photos, promotional signs, advertisements, and photos on the wall matching those in the album. In addition, there are photos of the stockholders, loading of mint into vats, harvesting, and the distillery on the company barge towed by the Caledonia steam launch. The panoramic photographs offer striking images of vast timber stands which stretched right down to the water line, as well as the scale of the marshlands created by the Bureau of Reclamation project. Unfortunately, although mint farming proved very profitable and successful on the marshland, lake regulations requiring additional setbacks to move the dikes, and erosion controls doomed the project within a couple years which resulted in several lawsuits for damages. Dr. Gaddes (1869-1965) was a very successful Canadian veterinary surgeon and land speculator, who would eventually sell out his share of the Eagle Ridge Development in 1925, and moved onto greener pastures. Epperson (1886-1966), was the Klamath Falls Bank Vice President, who later became a real estate speculator, insurance agent, and also opened the first radio shop in Klamath Falls. George Mattern was his father-in-law who had relocated from Iowa with the Epperson family when they decided to cash in on the Klamath Falls, Oregon land reclamation boom. Captain Siemans (1893-1962) was a World War I veteran, and Klamath Indian who worked as bank cashier, real estate promoter, and later for the U.S. Indian Service on the Klamath Indian Reservation. The last major initial investor was Watkins (1892-1948), who owned the local candy store and billiards hall in Klamath Falls, but after losing all his money in the mint farm speculation would become a real estate promoter and salesman, and later at the end of the Great Depression began working at the Kaiser Shipyards at the beginning of World War II. See: John C. Boyle, Regulation of Upper Klamath Lake, 50 Years on the Klamath; Louise Stone, Running Y Ranch, History of the Ranch (2016); Stephen Most, Klamath Basin Project (1906), The Oregon Encyclopedia (2016); Anders Tomlinson, Klamath Reclamation Project (2014); The Pacific Coast Mint Company, A Real Development Company, The Evening Herald, Klamath Falls, Oregon, Oct. 4, 1920, p. 8.