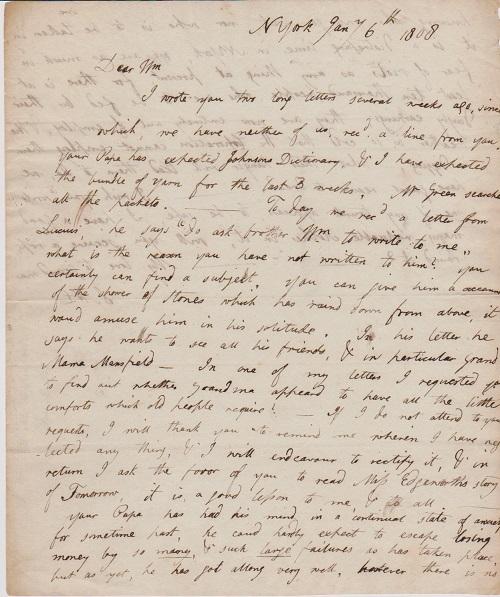 When Thomas Jefferson signed the Dec. 1807 Embargo Act, which prohibited the United States from trading with Europe, the United States went into an immediate and severe economic depression. Written 15 days after president Jefferson signed the Embargo Act, which was intended to punish the warring British and French for violating the neutrality of American merchant ships, but, in effect, nearly halting New England seaport commerce with Europe and thus triggering the first economic disaster of the new Republic. New York was especially hard hit, with one merchant firm after another driven to bankruptcy, thousands unemployed, and hundreds sent to debtor's prison. One who escaped the crash was William Leffingwell, husband of the writer. He was grandson of an ex-innkeeper who had profitably supplied Washington's Continental Army. Leffingwell expanded his fortune by shipping provisions to Revolutionary France during the Reign of Terror. When his wife wrote this letter, fearful of the hungry masses in the first American Depression, he had just sold his New York mansion, which was literally on Wall Street, and was moving to New Haven, where his son was at college, to become that city's richest citizen. This letter, written by Sally Maria Leffingwell, wife of wealthy New York City merchant William Leffingwell, was written to her son William who was attending Yale University. In it Sally Leffingwell is concerned about the economic peril in New York.

I wrote you two long letters several weeks ago, since which, we have neither of us, rec'd a line from you. Your Papa has expected Johnson's Dictionary and I have expected the bundle of yarn for the last 3 weeks. Mr. Green searches all the packets. Today we rec'd a letter from Lucius, he says "Do ask brother Wm to write me." What is the reason you have not written to him? You certainly can find a subject. You can give him an account of the shower of stones which has rain'd down from above., it would amuse him in his solitude. In his letter he says he wants to see all his friends, & in particular Grand mama Mansfield. In one of my letters I requested you find out whether Grandma appear'd to have all the little comforts which old people require? If I do not attend to your requests. I will thank you to remind me wherein I have neglected any thing & I will endeavor to rectify it & in return I ask the favor of you to read Miss Edgeworth's story of Tomorrow, it is a good lesson to me, & to all.

Your papa has had his mind in a continued state of anxiety for sometime past, he cou'd hardly expect to escape losing money, & such large failures as has taken place, but as yet, he has got along very well; however there is no knowing who will go next, nor who is to be taken in, it is a distressing time in N York, we are as much in fear of riots as anything at present, for there is at least ten thousand people who are to be fed by their daily earnings; they are now entirely out of employ, & the weather is so cold that the Corporation cannot employ them in digging. What their hunger will lead them to we have great reason to dread. I wish you to write me if my trunk appears to be safe. I have a good many valuable clothes in it. Will you secure a rope around it?

2 pp plus obverse stampless address leaf. The letter is very legible and in very fine condition. The family written about were:

Father William Leffingwell, whose mansion was on Wall Street in New York City, was one of the wealthiest individuals in New York City. Eventually he moved to New Haven, Connecticut.