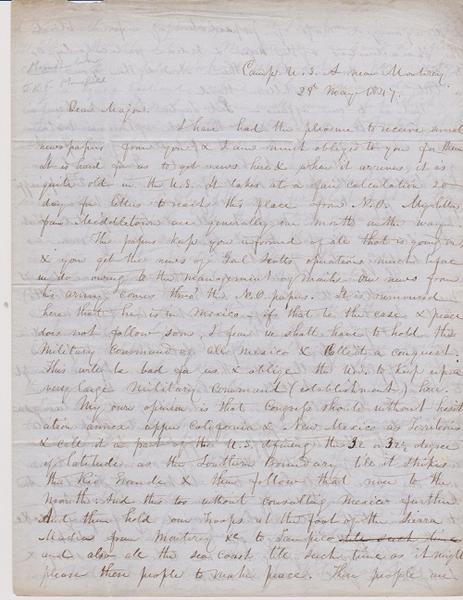 I have had the pleasure to receive several newspapers from you and I am much obliged to you for them. It is hard for us to get news here and when it arrives, it is quite old in the U.S. It takes at a fair calculation 20 days for letters to reach this place from N.O. (New Orleans). My letters from Middletown are generally one month on the way.

The papers keep you informed of all that is going on and you get the news of Gen’l Scotts operations much before we do owing to the management of mails. Our news from his army comes thro’ the N.O. papers It is rumored here that he is in Mexico – if that be the case and peace does not follow soon, I fear we shall have to hold this Military Command of all Mexico and Call it a conquest. This will be bad for us and oblige the U.S. to keep up a very large Military Command (establishment) here. My own opinion is that Congress should without hesitation annex upper California and New Mexico as Territories and call it a part of the U.S. defining the 32 or 32 ½ degree of latitude as the Southern Boundary till it strikes the Rio Grande and thus follow that river to the Mouth And this too without consulting Mexico further. And then hold our troops at the foot of the Sierra Madra from Monterey and c. to Tampico and also all the Sea Coast till such time as might please these people to make peace. These people are a disorganized mass of population of inferior blood. The characteristics of the Negro and Indian particularly as to color are prominent in them. Now and then you see a little of the pure Castilian blood.

But as to our affairs. Genl Taylor has not been in a condition to advance since the battle of Buena Vista. And at the present time the volunteers of the past year are on the march homeward. Genl Wool is at Saltillo with but a small force now. The 2nd Mississippi passed up to him a few days since. The Virginia Reg is here and the Massachusetts daily expected. But it will take till fall to get again, as many men as we discharge at the present time.

The Government will decide if they can move toward Mexico with both Columns, or with one (Gen’l Scott’s). Genl S. at present appears most wanting men and I presume from his easy line of communications only 250 miles from a Sea-port that he could keep his army supplied vastly better than we can. If we attempt to advance from Saltillo we shall have to over come one hundred miles, almost a desert, with waterings a whole days march apart, before we could strike into a country that wood afford supplies. In such an event in all probability, the advance launched off into an enemy’s country to sustain itself after a short period by foraging and c. and c. in the enemy (country) and running after we know not what.

This war is getting with me to be an old story and I should be glad to see it ended. I have with me Capt. Frazer and Lt. Benham of our Corps. We have the Citadel of Monterey in a good and efficient condition. For a field work it approaches a permanency being a square bastioned around a large square stone unfinished Cathedral whose walls are 6 feet thick. It will require in case of attack 1500 men to protect it; altho’ a much smaller force may have to do the work.

This country is nothing at all for want of a suitable seasons. We have hardly felt rain from last Sept to the middle of this month. All the operations of farming are carried on near small streams where irrigation can be practiced. Wence there are vast tracks of good soil a perfect waste.

We have the orange, lemon and pomegranate in great perfection and the fig too with other fruits not so luxuriant. But there is no place like home. Their buildings too are most remarkable. Where stone is abundant the walls are thick and strong and would answer well for jails. But where there is no stone, they are of adobys or sun dried brick, ready to dissolve, as did the City of Canargo freshet of last July. The roofs are mostly thatched except in the heart of the Cities where they are flat and covered with concrete on a strong platform.

I have written you quite a letter in thanks for your papers and hope you will continue to send them.

My Best Respects to your lady

Very Sincerely and Truly Yours

Within the context of this letter Jos. K.F. Mansfield proposes the immediate annexation of California and basically blames the delaying of any negotiations on the character of the Mexican people. Also discussed are the difficulties in moving the army, the fortifications at Monterey and future president Zachary Taylor “has not been in a condition to advance since the Battle of Buena Vista”.

Throughout his career Major Richard Dalafield (1798-1873) was the Superintendent of the United States Military Academy, Chief of Engineers, topographical engineer with the American commission to establish the Northern boundary under the Treaty of Ghent and a major General in the Union Army.

A four page letter on one folded sheet of which 3 pages are the letter and the forth has the address panel featuring a stamped postmark “Brazos June 15, 1847”. Usual minor wear with seal tear not affecting text.