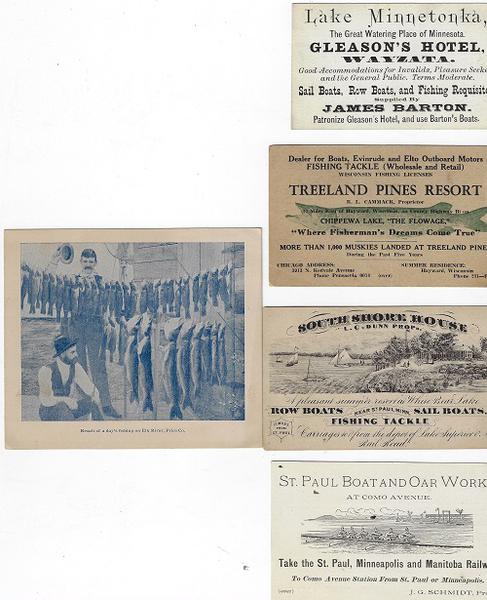 For as long as Dr. John Cletcher Jr. could remember, he and his family always made the trip “Up North” to vacation and fish on the Chippewa Flowage. He recalls the long ride, and the bumpy gravel roads that led to Treeland Pines Resort. In those days, Treeland Pines Resort was a beautiful, rugged jewel. As the brochure from this time period states, “Here at Treeland Pines, Mother Nature, in all her regal splendor, joined hands with man to create a perfect backdrop for staging the drama of all outdoor dramas, (reel) life in the open. “Lake Chippewa, The Flowage.” Bob Cammack’s Treeland Pines Resort, a jewel in a cluster of gems.” Sometime between 1942 and 1945, on one of the trips North to God’s Country, the Cletcher’s invited their friends Andy and Sarah to accompany them, as Andy had the “itch” to fish for the elusive musky. After a few days of fishing, the boys had yet to catch anything, so John Cletcher Sr. and Andy decided to venture further out into the rugged waters. They fired up the 5 horsepower motor and made it to the location that we know today as Cletcher’s Bar. Fishing with a Pfleuger Supreme Reel, True Temper Champion Fishing Rod, and casting a red & white Surf Oreno musky lure, they were bound and determined to catch the big one. At some point Dr. John Cletcher Sr. hooked into a fish that fought unlike any other fish he had ever had on the line. As the story goes, the fight raged on and John yelled to Andy to get the gun, it was then they realized that not only had they forgotten the .22 rifle, they also had forgotten the gaff hook! In a fishing frenzy, John told Andy to fire up the motor, they were going to drag the fish back to Treeland’s. As we all know how fisherman’s luck can run sometimes, it turns out that 5 horsepower motor was no match for whatever was on the other end of the line! In a last ditch effort, John told Andy to, “Start rowing for home!” at which point Andy grabbed the oars and yelled back, “What the hell way is home?!”. In no record time, Dr. John Cletcher Sr. and Andy rowed their boat through the old river channel, past the old McCloud Dam, through Musky Bay, past Toppings Bay and back to the shores of Treeland Pines, with the musky still on the line! Once back home all the guests gathered around to see what had been caught. Bob Cammack Sr. measured the fish in at 48” long and 45 pounds! After hearing the story of catching this monstrous musky, Bob Cammack Sr. decided to rightfully name this bar, Cletcher’s Bar—just as you know it today.

Each Trade card is in vg cond.