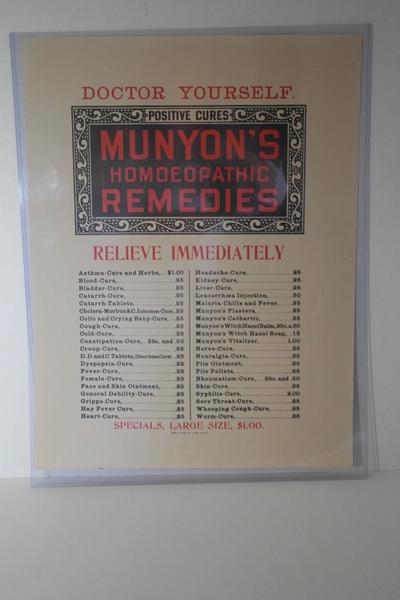 At the turn of the 20th century one of the infamous snake-oil salesmen was James Monroe Munyon who promised a “homeopathic” medical treatment in the curing of any disease. Having exhausted his luck at various professions among them being teaching, law, social work, publishing and song writing he founded his Homoeopathic Home Remedy Company in the early 1890s.

Establishing his headquarters in London in 1897, he challenged all people to find “positive cure” through the usage of his remedies. If you had a kidney problem try Munyon’s Kidney Cure, which analyses in 1907 was 100% sugar. If you were suffering from asthma his asthma medicine (sugar and alcohol) would be your cure. His catarrh cure was made up of sodium bicarbonate, salt, borax, phenol and gum and Munyon’s Pile Ointment was a farthing’s worth of soft paraffin.

Even though he was fined heavily by the United States officials as misbranding his “cures” he carried on his business with gusto. In 1903 he opened a luxury resort and hotel called the Hygeia, on a island he owned off of North Palm Beach, Florida which attracted wealthy invalids. One of the attractions of the place was the ready supply of Paw Paw Tonic, a cure-all made from papaya. The resort burned down in 1917 and a year later Munyon died of an apoplexy while having lunch at the Poinciana Hotel. His obituary in the New York Times quoted him as having said he started out with “virtually no capital except ambition and a belief in letting folks know about it”.