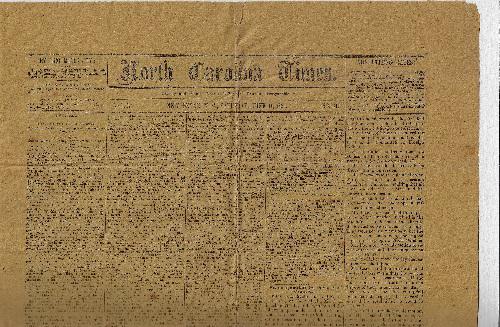 NORTH CAROLINA TIMES. LIBERTY AND UNION - NOW AND FOREVER - ONE AND INSEPARABLE. Vol. 1. No. 41. New Bern, N.C.. Saturday, June 11, 1864. New Bern was one of the first of the southern cities to fall to the Union Army of  Aggression during the Civil War. General Burnside took New Bern in March of 1862 and federal troops occupied the city through the rest of the War. The NORTH CAROLINA TIMES  was published, but due to lack of any sort of quality paper it was printed on a brownish paper that differs little from the necessity paper employed by the Confederates. Now the importance of this particular issues is that on the front page, columns 1, 2, 3 and part of 4 ( of 5 columns) is the Act establishing a territorial government for Montana, approved May 26, 1864. This  strongly suggest the continual continental growth of the Union despite the ongoing war. Other articles are a discussion of the "Peace Question in the Confederate Congress and a column on "The Dogma of State Sovereignty". The paper is the usual 4 pages with numerous advertisements on all 5 columns of page 4, local news, official notices, laws of the United States, drownings, listing of individuals who have letters which remain unclaimed, etc. Browned uniformly, probably as published, very readable, (although due to paper color it scans very blurred), overall in vg cond.