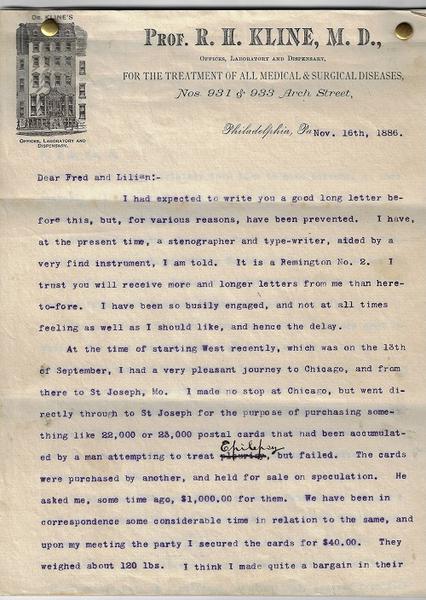 PROF. R.H. KLINE ‘S COLORADO MINING LETTER - 1886 A 27 page typewritten letter written by Prof. R.H. Kline, M.D. of Philadelphia, Pa. describing an 1886 railroad trip to visit the gold and silver mines in Colorado. The letter is typed on letterhead stationary. Also included are five photo portraits. A large oval photo and and 2 smaller ones are of Dr. R.H. Kline and two of Mrs. R.H. Kline (Charlotte Elgin Guild). The various photographers were Keeler and Fennemore of Philadelphia; Keeler and Co's Photograph Gallery, Philadelphia and F. Gutekunst, Photographer, Philadelphia. Also included is a small (3 1/2 x 4 inch) manuscript map of Arizona with the name Lillie Kline, September 1870 written on the back.

By the 1860’s Colorado gold and silver mines were flourishing due to the arrival of the railroads. In the later part of 1886, Philadelphia physician Robert Hays Kline traveled west to check on his mines including the Utica Mining and Milling Company in Boulder of which he was the largest majority holder of stock. He was also president of the Marble City Quarry Company in Gunnison.

Kline was the son of a wealthy Prussian emigrant who had fled to America after being exiled for expressing pro-democracy sentiments. His father settled in Pittsburgh and became a prominent distiller in Western Pennsylvania. The younger Kline graduated from Pen Medical University in 1859 and had several practices in Ohio and Indianapolis before establishing a large practice in Philadelphia. By 1866, he held a special chair for the study of malignant diseases at his alma mater, and in 1871, he established the Philadelphia Bellevue and Cancer Infirmary. In 1872, he began to publish a semi-monthly medical journal called the Medical Independent.

Excerpts from the letter written to Prof. Kline's daughter Lilian and her husband Fred:

"I had expected to write you a good long letter before this, but, for various reasons, have been prevented. I have, at the present time, a stenographer and type-writer, aided by a very fine instrument, I am told. It is a Remington No. 2. "

"Pueblo is pleasantly located on a depressed piece of land, and basin, as it might be termed, really low down among the foot hills of the Rocky Mountains. It is pleasantly situated, and has a population of about 30,000 inhabitants, but is in a rather dilapidated condition at the present time, so far as business and improvements are concerned. I did not stop there, but hastened on to Denver to look after business matters."

"The country from Pueblo to Denver is wonderfully wild and picturesque."

"After a days delay in Denver, which was Sept. 2oth, Mr. Fleetford and I, having made arrangements for starting to our mines, left Denver at 8 o'clock Tuesday morning for Pueblo, about 120 miles southward, and then to Buena Vista, about 100 miles westward. We passed through the Grand Cannons on the Arkansas River and through a mountainous region impossible for me to describe in this letter to you."

"You will allow me to state that the rocks are almost perpendicular from the river, and that in one place the bridge over which the train runs has to be suspended from the rocks above. You will think it a rough and rugged country to travel through. At this point the rocks are from 1,000 to 3,000 feet high, and in many places almost perpendicular. Their ruggedness and strange appearance strikes one with awe unaccustomed to them."

"This (Buena Vista) was an extravagant sample of a mining camp, ...."

"Wednesday, after making preparations for the mountains, we took each of us the best horse we could find, and being heavily clothed with everything that was apparently necessary for a winter campaign, and also with provisions, shooting arms, lariats, etc. we, at about 7 o'clock in  the morning, started for a ride of from 24 1/2 to 25 miles for Texas Creek, or Davis' Basin."

"Up to this time the ride was attended with pleasure, as the road was fairly good. We then had to leave the road, or wagon way, and make our way through timbers, over rocks and over only a trail for the next twelve or thirteen miles. Just after this point, we ascended the mountain for probably three or four miles, and which took us to the great divide between the Atlantic and Pacific slopes. This is really the back bone of the Rocky Mountains."

"These mountain horses, mules and donkeys have a remarkable way of taking care of themselves in these dangerous places. They seem to apprehend the danger as well as a man. I not unfrequented in order to save my horse, would allow him to climb the steepest places alone, and I would follow him and allow him to pull me up by his tail, rather than carry me on his back. Well we climbed, and puffed and rested, and would blow and climb again."

"The air became so rarefied, and I, being unaccustomed to it, it seemed as though I could scarcely breathe or get air enough to subsist upon. I made the best of circumstances, however, until we got to camp. We were then extensively above timber, or any growing thing, and between thirteen and fourteen thousand feet high, a good ways above perpetual ice and snow."

"But here, as good luck would have it, a couple of men, who have an interest in some claims, had a camp open. A shanty was built by setting timbers on end, being sunken securely into the ground at the lower end, and covered with a gravel roof. The enclosure was so open that we could put our hands through between the logs. There was scarcely anything to call a bed, merely split logs to lay upon. No floor, or any comforts at hand, and had it not been for the clothing that we or rather I took with us, we would have fared rather hard."

"These men, with two workmen (four in all) lived more like dirty pigs than anything else. They had but one pot, and if they are lucky enough to get a piece of meat with a few potatoes, or anything else that can be gotten hold of, all are cooked together, and the fork given them by their mothers, I mean their fingers is the one generally used."

I was asked by Mr. Fleetford if I could see a white streak down the side of one of these walls. I replied, "yes." He stated "That is your silver mine, do you want to go and see it?" I replied, "No, I can see enough of it from here." "Don't you want to go up on it?" I asked him what I could see provided I did. "Nothing in particular," he said. "Well," I asked, "What is the use of going?" Well he did not know that there was any use, only possibly curiosity. I told him that my curiosity was satisfied, and if there was a possibility of getting out of this place safely, I was willing to start down at once."

"Well you may ask, what was the object of my visit, and what was this all for? In reply I answer; I feel quite pleased with the prospect of our silver claims. We have three of them out in the Davis Basin, the Madeline, Maria Louise and Charlotte. I hold a majority of the interest in these claims, and the title is at present in my name, for the perfection of the titles to the same."

"An old man by the name of Stephen is endeavoring to steal the largest portion of one of our claims (Madeline). His action amounts to a regular steal, and, were it not for the personal effort I am making to save our property, he certainly would have succeeded, for the other parties in interest have not the capital to fight it."

"Since returning home, Mr. Rhett writes Mr. Hunsicker that if the Madeline had a railroad near it, it would be worth $150,000.00. It should be remembered, however, that it is to mr. Rhett's interests to elevate the price as much as possible, as he is one of the prosecuting attorneys."

I really think there is a vast amount of silver in this mine, From $100.00 to $200.00 per ton is readily obtained from surface diggings, and often several times more than this. A thousand has been claimed to have been received. The richness of these mines, however, we are trying at present to conceal, or at least not to say too much about, for we are bearing than bulling, We are not desirous of calling attention to the property in any way whatever, and shall not, at least until we get our titles completed."

"We got to Nevadaville about six o'clock in the evening.... Next morning took the horses and saddles for the Etna mine in Nevadaville."

"This mine is owned by Mr. Noonan, Mr. Balsinger, Mr. Fleetford and myself, each owing a quarter interest."

"We feel that we are in the midst of a very good gold bearing region. The claim is an old fashioned one, being really fifty by a thousand fee,  We are expecting to work the mine soon, but can as yet say but little of its prospects. Our purchase is conditional, as follows: We have a lease of the mine for three years, we are to pay 15 per ct. of the ore taken out in the three years, and at the expiration of the term of our lease, if we desire to take the property at $50,000.00, we may do so."

"There is a clause in the lease, which allows us to take repossession of the mine at any time within thirty days, so you see that if the parties having the mine in had at present should strike a rich vaine, we can very soon re-possess it."

"I have not yet much to say with reference to the December mine at Jamestown, near Boulder, because it is not thoroughly developed, by the history of the mine is good and the prospects seem favorable for a good working property, provided. of course, that money enough is spent to develop it."