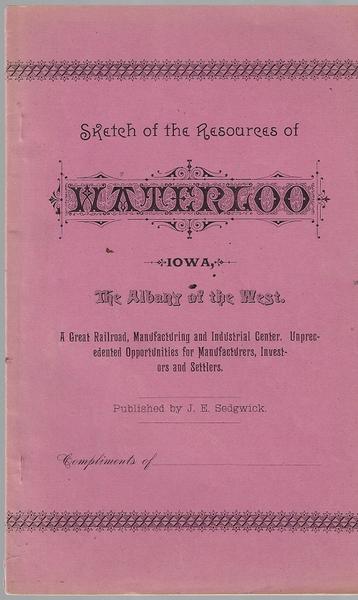 Sedgwick, J.E. (Pub.) SKETCH OF THE RESOURCES OF WATERLOO IOWA, THE ALBANY OF THE WEST. A GREAT RAILROAD, MANUFACTURING AND INDUSTRIAL CENTER. UNPRECEDENTED OPPORTUNITIES FOR MANUFACTURERS, INVESTORS AND SETTLERS. 1888. Pict. Wraps. 24 pgs. Numerous illustrations. A rare and important promotional for Waterloo, Iowa, the county seat of Black Hawk County. Originally known as Prairie Rapids Crossing the settlement began in the mid 1840’s and expanded rapidly once the hub of the Illinois Central Railroad was established their. “Waterloo is one of the largest jobbing centers in the Northwest, filling its own distinct field in most of the lines of jobbing. Nearly a hundred traveling salesmen represent the city in its tributary territory. Among the most prominent are The Fowler Company, wholesalers of fruits and grocers’ specialties, the George B Rowell Glove and Mitten Company, the Waterloo Notion Company, W.W. Forry, wholesale druggist, Wangler Brothers, wholesale druggists and Cutler & Parker, wholesale hardware.”....… “The business firms are large, and rank high in commercial circles; capitalists are coming here seeking investments; the values of lots are not now nor never have been inflated, and may be purchased for one-half the money similar lots will cost in a less favored city. There is a vast field for the building up of enterprises, and the city is well known as one of the handsomest in the state, with magnificent schools and fine churches.”

The publisher, J.E. Sedgwick, has only one other title to his name on OCLC – an extensive Waterloo directory for the same year. Sedgwick remained an active player in Waterloo in the coming decades. He started a construction company in 1903, was president of the Waterloo Candy Company in 1905 and is recorded as a producer of “sand and gravel” in 1914. OCLC lists a single copy at University of Michigan. In vg cond.