Read it and Weep! "Borger" The Little Oklahoma - Broadside 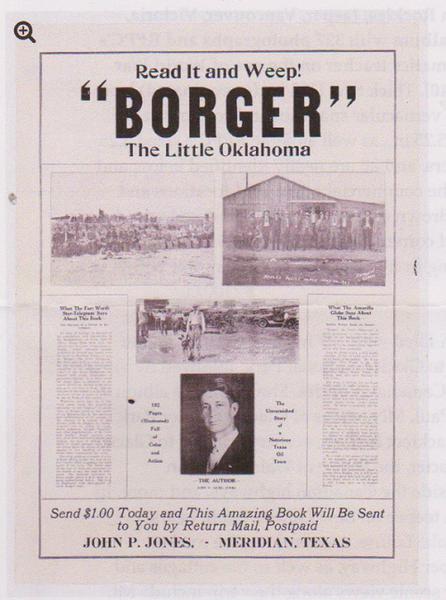 Read It and Weep! "BORGER" The Little Oklahoma. By John P. (Slim) Jones. The Unvarnished Story of a Notorious Texas Oil Town. 192 Pages (Illustrated) Full of Color and Action with reviews from The Fort Worth Star-Telegram and The Amarillo Globe. The Fort Worth Star Telegram writes "By way of writing an account of his experiences, with digressions, in the Southwestern oil fields, John P. (Slim) Jones flirts with both the slander and libel laws of the commonwealth." "It is these which lay Jones open to reprisals in the courts should the victims or his irony choose to call him to book." The Amarillo Glob writes "Borger, the Little Oklahoma," a book proposing to give the inside "dope" on the Panhandle's magic oilfield city from the time of its founding down to the present time...." "The book is written just as Jones would relate it orally, without style or grammatical construction. But the book contains many raw statements that have never appeared in print before and will probably never appear again except under Jones" name. He alone is authority for the statements." Borger must have been an exciting town as the photos featured, besides that of the author, are titled Borger Police Force - May 18, 1927; Borger's First Law - Two Gun :Dick" Herwig. The only three city ordinance Borger has are Dick Herwig and his smoking revolvers; and a photo of Texas rangers, sent to clean up the town, sitting on 300 confiscated slot machines and 1200 punch boards. Early Borger's town government fell under the control of an organized crime syndicate led by Mayor John Miller's shady associate, Richard "Two-Gun Dick" Herwig who marshaled the town wearing a white hat and carrying a pair of pearl - handled revolvers. He was named the town's chief law officer by his buddy, the Mayor. Upon his appointment Herwig brought a number of "friends" with him to staff his city marshal force and "police" the new town. Herwig's boys sanctioned and supervised saloons in open defiance of Prohibition and supplied illegal barrooms their own lines of bootlegged alcohol, beer and narcotics. They also collected weekly fees from prostitutes. Their criminal behavior and the murder of District Attorney John A. Holmes by an unknown assassin on September 13, 1929 resulted in Martial Law in the City of Borger when the Texas Rangers and the National Guard arrived on September 30th, 1929. A military-type court of inquiry was convened and very soon, "Two-Gun Dick Herwig" and his henchmen were behind bars. (A Look Back At Hutchinson County History) The town was born early in 1926, when Phillips brought in its first two producing wells in Hutchinson County. The discoveries marked the company's first venture beyond Oklahoma. They also opened the Panhandle Field, which stands today as the fourth largest oil and gas discovery in company history. One discovery well flowed 6,360 barrels per day; the second, 1,063. With their completion, Phillips bought a 400-acre lease on the Coble Ranch and brought in 31 gushers without a miss. Gasoline plants, pumping stations, warehouses and a refinery followed quickly, and the county prospered. Within days of the initial discoveries, A.P. "Ace" Borger had arrived and on March 8, 1926, established the Borger Townsite Corp., selling lots for homes and business locations. The Borger population grew to 15,000 in a few months, reached 30,000 at its peak and stabilized at 16,000 to 18,500 as the area prospered. Broadside (20” x 14”) advertisement for John P. Jones’ book. Vg cond.