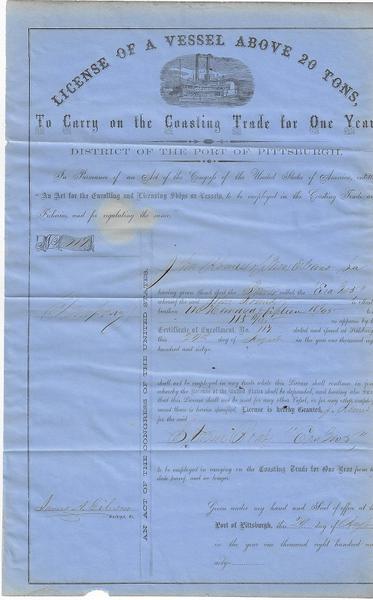 “ERA NO. 5 steamboat license dated August 29, 1861. She was a shallow-draft steamer built in 1860 at Pittsburgh, Pennsylvania. The master was Captain Noah Scovell who ran the Red River – New Orleans route and came from a family of nautical men of the same name. She was chartered by the Confederates early in 1863 to transport corn from the Red River to Camden, Arkansas. As the steamer, laden with 4,500 bushels of corn proceeded to her destination on 14 February 1863 she was captured by the USS Queen of the West on the Red River near Atchafalaya. The Queen of the West continued upstream to investigate reports of steamships at Gordon's Landing near Marksville, Louisiana. She came under heavy fire by the shore batteries of Fort DeRussy and was run aground onto the right bank by her pilot instead of backing down river as ordered. She was directly in the sight of Confederate guns, which pounded her until Ellet ordered "abandon ship,". Ellet and the crew escaped and floated downstream on bales of cotton and were rescued by the De Soto. The Queen of the West was not burned out of concern for the 1st mate who was wounded and could not be moved. The USS Queen of the West was captured, repaired and re-entered into service as the CSS Queen of the West by the Confederate forces. (Sources: Wikipedia; 290 Foundation; Steamboat of the Western Rivers in the Civil War by John Bowman)

One minor bottom edge chip, a great vignette of a side-wheel steamboat, overall in vg cond.