Remarks and Criticisms on the Hon. John Quincy Adams 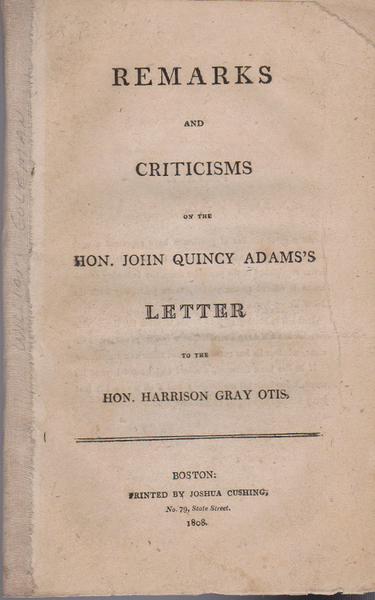 (John Quincy Adams) Coleman, William. REMARKS AND CRITICISMS ON THE HON. JOHN QUINCY ADAM'S LETTER THE HON. HARRISON GRAY. Boston. Joshua Cushing, Printer, dbd. and reinforced with cloth at the spine; 62 pgs. This attack on Adams, a Jeffersonian, does not include the name of its author, but it was written by William Coleman (whose name has been penciled along the cloth reinforcement of the spine) in Otis's defense. The Preface reads, "As a great number of gentlemen have expressed a wish to see the remarks and criticism on the Hon. Mr. Adam's letter republished in the pamphlet form, the following compilation is offered to the publick, taken principally from the New-York Evening Post. It is left to literary men to decide whether the Honourable Senator has not been overrated as a scholar; and to politicians, whether he has not disappointed them as a statesman. If he has been flattered, admired and trusted beyond his merit, it has been his misfortune; and if all is now left that justly belongs to him, he cannot complain." Interesting perspective on this future President and statesman. Upper right corner of title page missing; some toning on front and back pages; o/w very clean in VG condition.