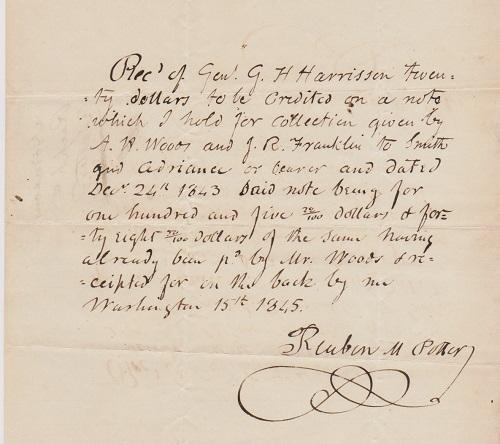 Rec’d of gen’l G.H. Harrison Twenty dollars to be credited on a note which I hold for collection given by A.N. Woods and J.R. Franklin to Smith and Advance or bearer and dated Dec. 24th 1843 Said note being for one hundred and five 00/100 dollars and forty eight Dollars of the same having already been Pd by Mr. Woods and receipted for in the bank by me.

POTTER, REUBEN MARMADUKE (1802–1890). Reuben Marmaduke Potter, soldier, author, and customs officer, son of Ichabod Potter, was born in Woodbridge, New Jersey, on February 14, 1802. From 1827 to 1833 he was an agent of a commercial house in Matamoros, Tamaulipas. During the Texas Revolution he was successful in obtaining a decree of amnesty from the Mexican government for twenty-one Texans who were the Matamoros prisoners. Potter arrived at Velasco, Texas, on July 20, 1837, and between 1837 to 1845 served as chief clerk, deputy collector, and collector of customs at the port of Velasco and as comptroller of customs at Galveston. In May 1841 he prepared for Mirabeau B. Lamar a Spanish translation to be carried to the people of Santa Fe by the Texan Santa Fe expedition. In 1844 Potter was appointed to carry money to Mexico for the relief of the prisoners of the Mier and Texan Santa Fe expeditions. In 1846 he served as interpreter for José Antonio Navarro during the first session of the state Senate.

In December 1846 Potter became secretary to Maj. Gen. Thomas S. Jessup, quartermaster general of the United States Army, and accompanied him on a tour of inspection of Mexican ports invested by United States troops during the Mexican War. Potter was appointed military storekeeper of the Quartermaster Department on March 23, 1848, and in April 1851 accompanied Henry Whiting, the assistant quartermaster general, on a tour of inspection of army posts in Texas. Potter was assigned to duty in San Antonio in December 1857 and was made a prisoner of war on April 23, 1861, when federal troops at San Antonio surrendered to Confederate forces under Ben McCulloch. After being given a parole that prohibited his entering military service or taking up arms, he reported to Washington in May 1861 and was assigned to quartermaster duties in New York. He was appointed captain on July 28, 1866, and retired from the army on June 30, 1882.

Potter did considerable writing. In October 1836 he wrote the "Hymn of the Alamo," which received attention in several Texas publications. Many of his articles dealing with the history of Texas were published in Eastern papers and periodicals such as the New York Times and the Magazine of American History. Potter was considered an authority on the Alamo, and Henry A. McArdle consulted him when gathering information for his painting Dawn at the Alamo. Potter married Fidelia Burchard in Austin on March 23, 1853; they had one daughter. He died in New York on March 18, 1890, and was buried in Woodbridge, New Jersey. The monument that commemorates the establishment of Cameron County bears his name. (From: The Texas State Historical Society)