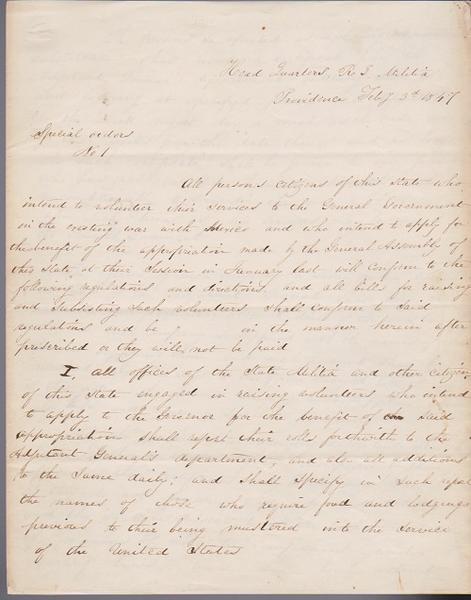 It reads in part: "All persons citizens of this state who intend to volunteer their services to the general Government in the existing war with Mexico and who intend to apply for the benefit of the appropriation made by the General Assembly of this State at their Session in January last will conform to the following regulations and directions, and all bills for raising and subsisting such volunteers shall conform to said regulations and be in the manner herein after prescribed or they will not be paid. 1) all officers of the state militia and other citizens of this state engaged in raising volunteers who intend to apply to the Governor for the benefit of said appropriation shall report their rolls forthwith to the Adjutant General's department, and also all additions to the same daily; and shall specify in such report the names of those who require food and lodging previous to their being mustered into the service of the United States. The persons so reported as requiring subsistence shall receive a certificate from the Adjutant General's department entitling them to board and lodging at specified places and definite prices (by the week night day or meal as the case may be) for three weeks from the date thereof and no longer. No such certificate shall be given to any person who has not enrolled himself absolutely and unconditionally to serve in the war with Mexico upon such terms as his services may be received by the General Government. The officers of each company or some person designated in each by the Adjutant General shall keep an accurate and particular account daily of the names of the persons supplying them, and such account shall be returned every three days to the officer charged with the execution of this order. The persons sending such supplies shall also keep and return a similar account. All the persons thus receiving subsistence shall be kept together and under regular discipline by their officers and their certificates may at any time be cancelled if they do not preserve good order and discipline and they shall be subject to all the liabilities and duties of members of volunteer companies under existing laws, and are hereby ordered and retained in the public service of this state until they are mustered into the service of the United States.... Captain Charles Hart assistant Adjutant General is hereby charged with the execution of this order...."

It is secretarially signed at the conclusion by "Byron Diman" as Governor and "T.E. Jenckes" as Adjutant General. 3 pgs, 8" x 10". Dated Feby 3d, 1847. Head Quarters, R.I. Militia Providence. A contemporary copy of "Special Orders No. 1" giving instruction for Rhode Island volunteers in the Mexican War. The letter is in very fine condition and important as to its outstanding content about Rhode Island's entry and contribution to the Mexican War.

Byron Diman was the Law and Order party candidate for governor. He did not receive the majority of votes, but was elected as governor of the state by the state assembly and served from May 6, 1846 to may 4, 1847. later he would serve for three years in the state assembly.

T. A. Jenckes is regarded nationally as "the father of civil service reform." As a leader in the Law and Order Party, he became state adjutant general of Rhode Island beginning in 1845. "Jenckes served in the U.S. House of Representatives from 1863 to 1871 as a Radical Republican and wrote an article of President Andrew Johnson's impeachment, the federal Bankruptcy Act of 1867 and several laws relating to patents. He is remembered best, however, as a leader in the movement to reform the federal civil service from a system based on patronage t one founded on "merit." He patterned his reform bill on the British system of open, competitive examinations for government jobs. In its general outline, the original Jenckes Bill, which did not pass furnished a model for the famous Pendleton Civil Service Reform Act of 1883, a measure that was enacted by Congress seven years after Jenckes died in his native town of Cumberland." (RI Heritage Hall of Fame)