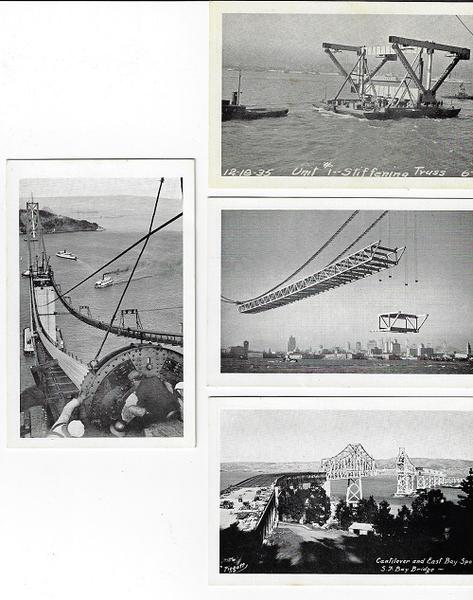 Moulin, Gabriel and Piggott (attributed to). SAN FRANCISCO-OAKLAND BAY BRIDGE. 18 MINATURE POST CARDS IN ORIGINAL MAIL FOLDER. J.C. Bardell, 1936. 1st. Each identified card is black and white, 3 x 4 1/2", and contained in a pictorial mail folder. The post cards include views of construction work, framing, excavating the tunnel, engineers and construction workers, and finally the completed bridge.The ground was broken in 1933 for the San Francisco-Oakland Bay Bridge which would end up being the largest and most expensive bridge of its time. Political hurdles were an impediment as there had been talk about building a bridge between Oakland and San Francisco since the 1870's but it was not possible until the Reconstruction Finance Corporation supported by President Herbert Hoover agreed to purchase bonds to be repaid later with bridge tolls, that the project moved forward and was completed in 1936. Each card is in vg condition with the unmailed but addressed folder having expected minor wear. OCLC list 1 copy at the San Francisco Maritime National Historical Park Library.