Selling Lots in the Town of Jacinto, Texas. 1836 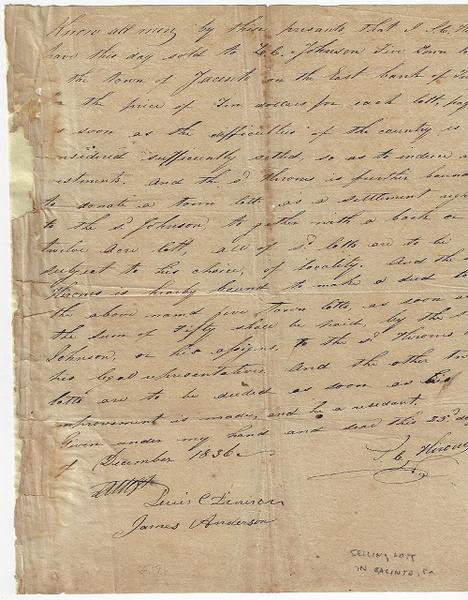 DEED FROM H.S. HIROMS TO L.C. JOHNSON BEING THE SELLING OF LOTS IN THE TOWN OF JACINTO, TEXAS ON THE EAST BANK OF TRINITY. [Jacinto, TX]: December 23, 1836. H.C Hiroms agrees to sell to L.C. Johnson “Five town lotts in the town of Jacinto… for the price for ten dollars for each lott, payable as soon as the difficulties of the country is considered sufficiently settled…” Hiroms also agrees to donate two more town lots to Johnson once the original five are paid for, and “as soon as his improvement is made, and he a resident.” Signed by S.C. Hiroms and witnessed by Louis C Denison and James Anderson. At the time of this deed, Texas had just gained her independence from Mexico, and was establishing herself as an independent Republic. Hiroms may be Capt. Samuel C Hiroms whose company was present at the Battle of San Antonio in 1835. An article by Beverly Miller in the Polk County Enterprise, published June 23, 2016, mentions S.C. Hiroms, an early settler in Texas. He arrived from Kentucky in 1830, settling along the Trinity River and helping to establish the town of Smithfield (later part of Polk County). Hiroms was postmaster there in 1840. Mss.broadside , 9 ½ X 7 34 inches. A few small holes along a vertical fold. Left margin damaged, affecting several words. Repairs made with Japanese paper. Very good.