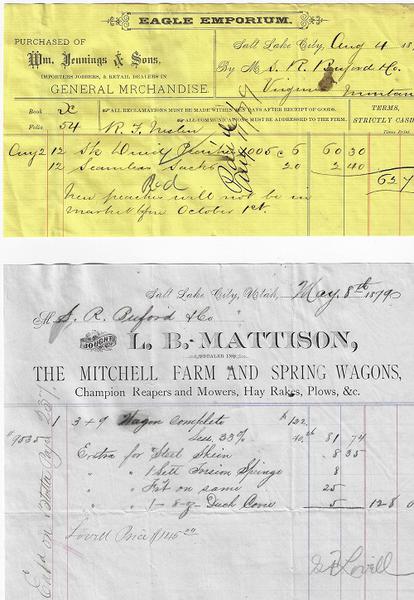 An extremely important archive of incoming invoices from northern Utah wholesale suppliers to Simeon Buford's Buford Mercantile Company in Virginia City, Montana. The earliest items are six separate ALS to Henry Elling. The archive contains 66 records, mostly on letterhead, from the Buford Mercantile Company of Virginia City between 1874-1909. They give a thorough historical business view of how Virginia City survived through the import of all types of food and daily supplies which the populace needed.

Backed by banker Henry Elling, in 1878, Simeon R. Buford, a freighter and bookkeeper, went into business for himself, opening the Buford Mercantile Company. The store would become one of the most successful in Virginia City history, operating well into the 1920s. Buford’s was the supply point for most of southwestern Montana, including the infant “Butte City.” In later years, Butte’s huge warehouses would, in turn, supply Buford’s own business.

“The Buford Mercantile Company was founded in 1878 by Simeon R. Buford, who ran the store continuously until his death in 1905. The store was then operated by Simeon‘s younger brother, Charles H. Buford, finally closing in the 1920s. S. R. Buford was a meticulous record keeper, and saved everything from ledgers and receipts to tin can labels and letters. A wealth of information regarding how he ran his business is thus available for research (to which this archive would be most valuable). A keen businessman, one ledger for Buford‘s store dated December 10, 1883 – January 28, 1884, shows that Buford was open every single day in that time period—including Christmas and New Years—and also made sales every single day without exception.” (Source: Laura Joanne Arata; Historic Montana)