Society of the United Germans at Teutonia 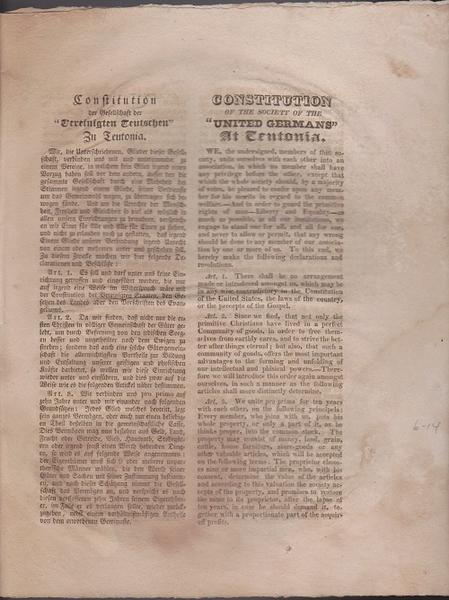 The Society of United Germans was a Rappite offshoot established in Teutonia, Ohio , established in 1827 lasting until 1831. Peter Kaufmann (1800-1869?) was a German born printer and publisher who came to this country in 1820. He met Robert Owen in 1825 and settled in the Economy community in 1826. The following year he was the leader of a group that established Teutonia which by 1831 was unsuccessful. Possibly printed by Kaufmann, who by 1828 had settled in Canton (see Coyle, Ohio Authors). Others suggest that the printing can be attributed to the press of Johann Sala of Canton, Ohio on the basis of typographical evidence. Botte and Tannhof. Not in Shoemaker. WorldCat and OCLC locate only 9 copies and say "Place of printing from Fogarty, R.S. Dictionary of American and Communal and utopian History, #41 (entry Teutonia); date from prof. K.J.R. Arndt...Arndt suggests this may have been printed by J. Ehrenfried of Lancaster who was friendly toward the society.

Art. 3 "We unite pro primo for ten years with each other, on the following principels: Every member, who joins with us, puts his whole property, or only a part of it, as he thinks proper, into the common stock. The property may consist of money, land, grain, cattle, house furniture, store-goods or any other valuable articles, which will be accepted on the following terms: the proprietor chooses nine or more impartial men, who with his consent, determine the value of the articles and according to this valuation the society accepts of the property, and promises to restore the same to its proprietor, after the lapse of ten years, in case he should demand it, together with a proportionate part of the acquired profits."

Art. 6:1 "The establishment of good schools and institutions of education, of our own children, as well as for those of others. Into these institutions we will receive poor orphans, and the children of the poor and indigent, without distinction of language, contry, nation or color, entirely gratis, and give them not only all the necessaries of life, but also instruct them in every useful occupation and knowledge, so that they may become men in the most pure sense of the word, and then afterwards Christians."

Art. 6:2 "We shall further use a part of our means for the redemption of our Black brethern, not only out of their bodily slavery, but also for their reformation into quiet, peaceable and industrious men, and exemplary Christians. 3. Something similar we have in view, with regard to the Aborigines of our blessed country - as we shall not shun any pains, to convert the Indians to Christianity, and ennobling civilization."

Art. 8 "In ratification and confirmation, we do sing meanwhile, this constitution with our own hands, and the same shall remain in force so long, until the whole society finds it necessary, to project a more extensive and comprehensive one." Signed in print by 19 leaders (representatives) of the Teutonia community.

A very good copy with some minor browning and staining, of a scarce document.