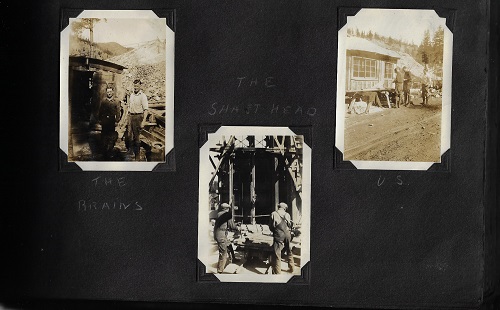 Gordon Waddell’s photo album of his New Mexico trip which he and friends made in March of 1930. Primarily the photos are of New Mexico with some emphasis on the Tererro Mines at Tererro, New Mexico. Waddell spells the mines as Terro throughout the album. There are 268 photos (sizes 3 ½ x 2 ½; 5 x 3 ¼ and 2 ¾ x 4 ½ inches) and 4 picture post cards.

Tererro was strictly a mining camp which was started in 1882 with the mining of copper. Owned initially by The Goodrich-Lockhart Company, it was sold in 1926 to the American Metal Company. Under their ownership the mines grew with the mining of gold, silver, lead and zinc. Tererro grew to a population of 3,000 with a school, hospital, restaurant, jail, boarding houses and “Chihuahua” which was the Spanish name for its red-light district. After a mining strike in 1939 the town slowly died until today all that remains is a store. The buildings have all been demolished as the United States Forest Service is restoring the land to its natural state. (Source: Ghost Towns)

The photos of Waddell’s March 1930 trip include those of the Pecos Ruins, Pecos, NM; the oldest well in America at Glorieta Pass – Pigeon’s Ranch which was already famous by the Fight For Pigeon’s Ranch at the Battle of Glorieta Pass, New Mexico on March 28, 1862; views along the Santa Fe Trail and The Grand Canyon Line; Santa Fe; Puye Cliff Dwellings; Starvation Rock, Holy Ghost Canyon in the Pecos Valley; Bishop’s Lodge and Valley Ranch, Santa Fe; La Fonda and Las Vegas, NM; Terro (Wadell’s spelling) Mines; Logging in Terro, NM; The Tex Austin Ranch (which would have been the Forked Lightning Ranch owned by the “King of the Rodeo” or “Daddy of the Rodeo” Tex Austin; Glorieta; Mud Cliffs in the Rio Grande Valley, Puye, Santa Clara, New Mexico, plus more.

Overall the photos have great contrast with the majority being identified. The album is stiff tied boards with the work Photographs on the front. Vg cond.