Territory of Jefferson - Statehood For Colorado 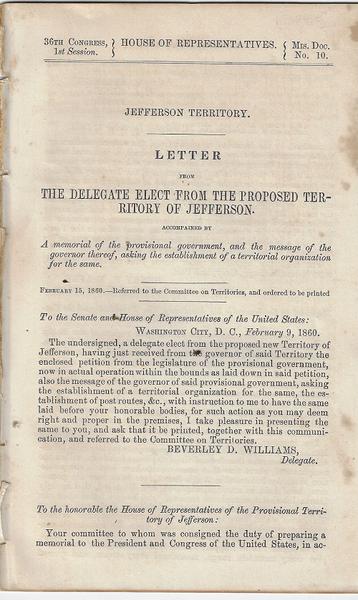 TERRITORY OF JEFFERSON – STATEHOOD FOR COLORADO

(Colorado)  JEFFERSON TERRITORY. LETTER FROM THE DELEGATE ELECT FROM THE PROPOSED TERRITORY OF JEFFERSON ACCOMPANIED BY A memorial of the provisional government, and the message of the governor thereof, asking the establishment of a territorial organization for the same. HOUSE OF REPRESENTATIVES. 36TH Congress - 1st Session. Mis. Doc. No. 19.

During the brief period from October, 1859 until February, 1861, Jefferson Territory was an extralegal and unrecognized United States territory. Geographically, it included most of present-day Colorado and then some - including portions of modern Kansas, New Mexico, Arizona and Utah. The residents of the area took the matter of forming a territorial government into their own hands as a result of the tremendous influx of prospectors and miners to the area caused by the Pike's Peak God Rush that began in 1858.

After this great increase in emigration in the 1850’s, settlers in Arapahoe Co., Kansas Territory, felt the need to be closer to the seat of government. They met in convention in Denver on August 1, 1859 to discuss alternatives to the region’s status. The 166 delegates present debated the benefits of reorganization as a state or as a territory and submitted the question on September to the public, which voted overwhelmingly for territorial status. Subsequently, Beverly D. Williams was sent as a representative to Congress, which, refused his petition. Nevertheless, the constitution of the territory of Jefferson was adopted on October 24, and the first session of its legislature met on November 7. Robert W. Steele was elected provisional governor. Although illegal, the new government coexisted peacefully with the official county institutions. Laws were passed regarding taxation, and the franchise was denied Native and African Americans. On February 28, 1861, Congress passed the Organic Act, which created the Territory of Colorado of Colorado. The provisional government quickly dismantled and William Gilpin replaced Steele as governor. (Columbia Electronic Encyclopedia)

This document contains the memorial of the Jefferson Territory legislature to the U.S. government asking for the formal establishment of a United States territory. The document provides an overview of the geography and a rich mineral resources of the territory, noting that "At Russell's gulch, a basin-like valley in the mountains, many persons have realized from $500 to $300 per day to the hand, and in many other localities miners have been equally successful."

The largest towns of the Territory are noted as Denver, about 1100 people and Auraria with about 1000 individuals. Also included is a chronology of the events leading to the creation of the Territory. While this petition did not succeed, Colorado did finally become a U.S. Territory in February, 1861. Statehood followed fifteen years later.  An important document in Colorado's path to statehood.