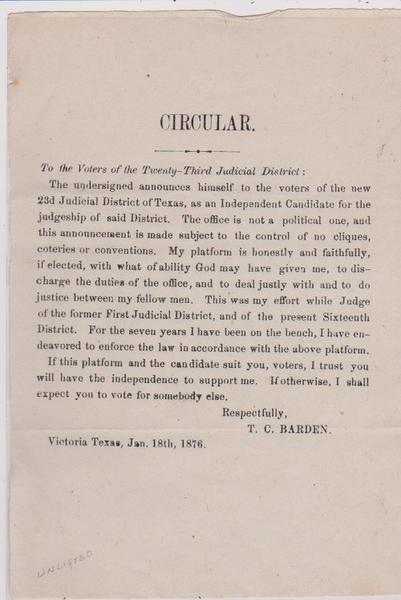 (Texas) Barden, T.C. CIRCULAR. Victoria Texas, Jan. 18th, 1876. Broadside. "To the Voters of the Twenty-Third Judicial District:" Barden, who was the judge in the former First judicial and presently in the Sixteenth District continues to state, "The undersigned announces himself to the voters of the new 23d Judicial District of Texas, as an Independent Candidate for the judgeship of said District.....My platform is honesty and faithfully, if elected, with what of ability God may have given me, to discharge the duties of the office, and to deal justly with and to do justice between my fellow men. ....For the seven years i have been on the bench, I have endeavored to enforce the law in accordance with the above platform." Barden won the election but was later impeached for corruption from this office. Not in Winkler-Friend. A scarce broadside in vg cond.